The U.S. Navy's LCACs Are Ready to Do Amphibious Landings Again 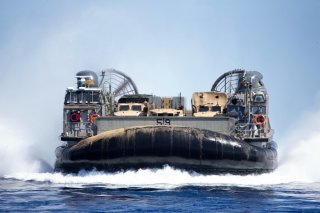 As a new kind of LCAC, the SSCs are bringing paradigm-changing technology to the U.S. Navy and Marine Corps to include an ability to transport Abrams tanks from ship to shore, travel at faster speeds, operate with a more powerful engine, and capitalize on breakthrough digital controls and computer technologies. However, at the same time, the older LCACs have been massively upgraded and reconfigured for continued high-performance missions.

The fleet of seventy-two existing LCACs was reconfigured with new engines, rotating machinery, command and control systems, skirts, and fixes to prevent corrosion issues. The effort is designed to put another ten years of life back into the LCAC, U.S. Navy officials told The National Interest.

The idea with the service life extension is to bridge the time-lapse until the new SSCs are ready to enter the force in larger numbers. Some of the enhancements of the old SSCs are designed to address the changing threat landscape in a modern environment, a scenario that is expected to change how amphibious operations will be conducted in the future.

Increased digital navigation also raises the prospect of improved networking between SSC, amphibious “mother ships,” or other kinds of surface platforms. Perhaps SSCs could operate in tandem with Unmanned Surface Vessels (USV) sweeping for mines, coordinating mission objectives, or sensor data. A USV minesweeper could, for example, find mines that might otherwise be in the path of SSC.

Digital connectors can not only expedite manned and unmanned vessel coordination but also further enable connectivity between a large, big-deck amphibious craft and groups of dispersed SSCs approaching shore. This improves the possibility for advanced command and control, the transmission of real-time intelligence data, and the potential for in-transit adjustments depending upon threat conditions.