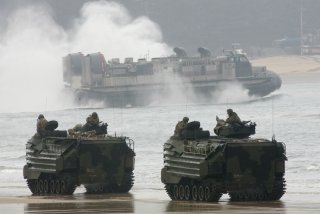 The U.S. Navy is preparing to deploy a new fleet of high-tech ship-to-shore amphibious landing craft to expedite newer strategies of amphibious assault. This plan would use fast-moving, tank-transporting vessels that are able to find and penetrate enemy shorelines, deliver Marines and armored vehicles, reinforce supplies—and offload forces for attack.

The new SSCs represent the Navy effort to replace its fleet of aging Landing Craft Air Cushion (LCAC) vessels with high-tech, more capable ship-to-shore transporters able to conduct the full range of amphibious and maritime combat operations. Built by Textron Systems, the new SSCs are now being delivered to the Navy through a $386 million deal to deliver the first fifteen. The first one was delivered earlier this year.

The Navy’s seventy-two LCACs can only transport sixty tons, making it impossible for amphibious operations to transport seventy-ton Abrams tanks. This is of great significance because tanks are naturally very difficult to deploy, and having an ability to deploy them on SSC allows for a more dispersed, or disaggregated attack, something which can enable heavy armored attack at several different resistance points simultaneously.

Textron’s upgraded Ship-to-Shore Craft includes lighter-weight composite materials, and the new SSC’s have also moved to a lower frequency for ship electronics, moving from four hundred Hertz down to six hundred Hertz in order to better synchronize ship systems with Navy common standards. Along with these properties, the new craft uses hardware footprint reducing advances to lower the number of gearboxes from eight to two.

Increased digital navigation also brings the prospect of improved networking between SSC, amphibious “mother ships” or other kinds of surface platforms. Perhaps SSCs could operate in tandem with Unmanned Surface Vessels (USV) sweeping for mine, coordinate mission objectives or sensor data? A USV minesweeper could, for example, find mines, which might otherwise be in the path of SSC.

Forward operating surface and undersea drones, if sufficiently networked, can deliver weapons, conduct reconnaissance missions, test enemy defenses and hunt submarines, among other things, all while connected to SSCs. This could help SSC stay out of a line of enemy fire and avert potential high-threat areas, ensuring a greater likelihood of a successful landing.

Digital connectors can not only expedite manned-unmanned vessel coordination but also further enable connectivity between a large, big-deck amphibious and groups of dispersed SSCs approaching shore. This improves the possibility for advanced command and control, the transmission of real-time intelligence data and the potential for in-transit adjustments depending upon threat conditions.