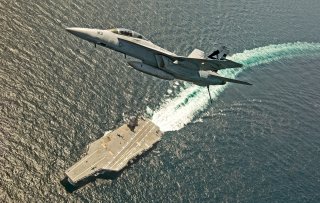 Last week a new Congressional Research Service report, “Navy Ford (CVN-78) Class Aircraft Carrier Program: Background and Issues Congress,” was released. It comes as the first of its class, USS Gerald R. Ford, has recently completed an Air Intercept Control (AIC) event. This latest accomplishment was another milestone for the supercarrier’s operational progress as she passes the high-way point of her eighteen-month Post-Deliver Test and Trails (PDT&T) Business Insider reported.

In June, the carrier completed the tests to prove that it could launch and recover jets as its air wing began to embark. She is the first new aircraft designed for the U.S. Navy in more than forty years, and plans are to have four of the class completed by February 2032.

USS Gerald R. Ford was procured in fiscal year 2008 (FY2008), and according to FY2021 budget estimates cost approximately $13.3 billion (in then-year dollars). The warship, which was commissioned into service in July 2017 and currently the Navy is completing work on the construction, testing and certification of the carrier’s eleven weapons elevators and to correct other technical problems aboard the ship.

While not specifically addressed in the Congressional Research Service report, one of the bigger issues facing the Ford has been its toilet systems, which have been prone to clogging. A similar issue has impacted the USS George W. Bush (CVN-77), the newest Nimitz-class aircraft carrier. Unclogging the systems can cost upwards of $400,000.

More on the Way

The report also highlighted the eventual costs and schedule for the other Ford-class carriers.

The next in class, USS John F. Kennedy (CVN-79) was procured in FY2013 and is being constructed with an improved process that incorporates lessons learned from the construction of CVN-78. She is scheduled for delivery to the Navy in 2024. The FY2021 budget estimate for the ship’s procurement is about $11.4 billion.

Two more carriers are planned including CVN-80 (Enterprise) and CVN-81 (Doris Miller)—with the former procured in FY2018, and the proposed FY2021 budget estimate is that it will cost about $12.3 billion and is scheduled for delivery to the Navy in March 2028; while the latter was procured in the FY2019 budget. The FY2021 budget submission estimates the ship’s procurement cost to be around $12.5 billion and she is scheduled for delivery in February 2032.

Currently, the Navy’s aircraft carrier force consists of eleven CVNS, including ten Nimitz-class carriers (CVNs 68 through 77), and those ships entered service between 1975 and 2009; and one Gerald R. Ford-class (CVN-78) class carrier, which was commissioned into service on July 22, 2017.

10 U.S.C. 8062(b) requires the Navy to maintain a force of not less than eleven operational aircraft carriers. The requirement for the Navy to maintain not less than a certain number of operational aircraft carriers was established by Section 126 of the FY2006 National Defense Authorization Act (H.R. 1815/P.L. 109-163 of January 6, 2006), which set the number at twelve carriers.

The Congressional Research Service report also laid out some oversight issues including the potential impact of the coronavirus situation on the execution of U.S. military shipbuilding programs, including the CVN-78 program. That resulted in a delay in CVN-78’s first deployment due to the need to work on the ship’s weapons elevators.

This included the concerns over China’s improving capabilities for detecting surface ships and attacking them with anti-ship ballistic missiles and advanced anti-ship cruise missiles; and whether the potential capabilities of smaller carriers operating air wings consisting of unmanned aerial vehicles and/or F-35B Joint Strike Fighters would be a better utilized by the Navy. That could renew the long-standing debate of supercarriers over lots of medium-sized ones.