The U.S. Navy's Submarine Force Is Shrinking Fast (And Trump Just Made It Worse) 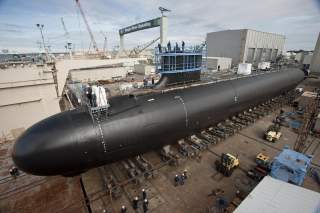 The U.S. Navy already was facing a huge shortage of attack submarines. Then came Pres. Donald Trump’s budget proposal for 2021. The Trump administration’s budget, if Congress approves it, would make the shortage worse.

Arguably the big winner in Trump’s Navy budget is China, which continues to add to its undersea force as America cuts its own.

The Navy long had planned to buy two Virginia-class attack submarines in 2021. But the $207-billion budget Trump has proposed for the Department of the Navy would buy just one attack submarine.

The Navy’s 2021 budget proposal is smaller by several billion dollars than the budget Congress ultimately approved for 2020 and reflects growing concerns over the health of the U.S. government’s finances. The government began running trillion-dollar annual deficits shortly after Trump and Republican allies in Congress in 2017 passed deep tax cuts for corporations and the wealthy.

Trump’s request includes just $20 billion for new ships, far short of the $24 billion the Navy spent on shipbuilding in 2020. The fleet had expected to buy at least 11 new warships in 2021, but Trump’s budget reduces the number to just eight, the lowest level of new shipbuilding since 2015, when the “sequestration” budget crisis imposed mandatory cuts.

If lawmakers approve the proposal without adding more money and more ships, the Navy will buy one Virginia plus a Columbia-class ballistic missile submarine, two Arleigh Burke-class destroyers, a guided-missile frigate, an amphibious landing dock and two salvage-and-rescue vessels.

The Columbia-class boomer with its $14-billion price tag heavily weighs on the 2021 budget. While the Navy plans to pay for each new boomer in multi-year installments, the vessels still could consume nearly a quarter of the shipbuilding budget in each of the years the fleet buys them.

The Navy considers ballistic-missile submarines a top priority, as they represent the fleet’s contribution to the United States’ nuclear deterrent. But it’s the looming shortage of attack submarines that most worries regional commanders.

It’s not for no reason that, in 2016, Pres. Barack Obama’s outgoing navy secretary Ray Mabus proposed the fleet build up the attack submarine force from a long-term objective of 48 boats to a new goal of 66.

The Trump administration initially hewed to Mabus’ force-structure goal. But that was before skyrocketing deficits squeezed federal spending. The Trump administration also twice in two years has raided Navy spending accounts of billions of dollars in order to divert money to a politically-motivated project to build a wall on America’s southern border.

The fleet in 2020 possesses 56 Los Angeles-, Seawolf- and Virginia-class attack submarines and Ohio-class cruise-missile submarines. Under previous planning, that number would drop to a low of 42 boats in 2028. If Trump gets his way and the Navy buys just one Virginia in 2021, the new low would be 41 boats -- 25 shy of the requirement.

Some senior leaders have worried that, in undersea capability, the Navy is falling behind rivals such as China. China in early 2019 possessed around 50 diesel-powered attack submarines and six nuclear-powered attack subs and was on track to add several more boats by 2020, the U.S. Defense Intelligence Agency reported in February 2019.

"The United States must maintain its advantage in undersea warfare—an asymmetric advantage that our adversaries are focused on eroding," U.S. Navy admiral Philip Davidson said in March 2019 congressional testimony.

"Potential adversary submarine activity has tripled from 2008 levels, which requires at least a corresponding increase on the part of the United States to maintain superiority," Davidson said.

But the 2021 budget proposal is a strong indication that the Trump administration either disagrees with Davidson’s assessment, or simply doesn’t care whether the United States keeps pace with China under the waves.