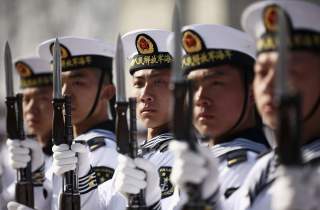 China is fielding a wide range of highly-capable weapon systems that could threaten U.S. interests in the Pacific region.

That was the stark warning from U.S. Navy admiral Philip Davidson, the commander of  U.S. Indo-Pacific Command, in his testimony before the U.S. Senate Armed Services Committee on Feb. 12, 2019.

"Over the last 20 years, Beijing has undertaken a massive effort to grow and modernize the People’s Liberation Army," Davidson explained in his written statement.

"The PLA is the principal threat to U.S. interests, U.S. citizens and our allies inside the First Island Chain—a term that refers to the islands that run from northern Japan through Taiwan, The Philippines and Indonesia—and the PLA is quickly increasing its ability to project power and influence beyond the First Island Chain," Davidson continued.

"Beijing pursues both qualitative and quantitative efforts to transform its military, modernizing its military platforms while simultaneously increasing the number of platforms in service."

Meanwhile, China's first domestically-built aircraft carrier -- an upgraded copy of Liaoning -- has completed four sea trials since May 2018. The vessel, reportedly named Shandong, likely will join the PLAN in 2019, according to Davidson.

The admiral also pointed to the Renhai class of guided missile cruisers, the first of which launched in 2017. Three more Renhais joined the fleet in 2018.

The biggest surface warships in Asia, with a missile armament equivalent to the U.S. Navy's own Ticonderoga-class cruisers, the Renhais "will be a key component of PLA Navy carrier strike groups," Davidson stated.

In Western parlance, a "sixth-generation" fighter is stealthy, fast, highly maneuverable and compatible with long-range weaponry that can help it to strike targets from outside the envelope of advanced air defenses.

Several countries besides China are studying sixth-generation fighter concepts, but no country yet has launched a formal development program for that class of fighter.

Davidson mentioned the Y-20, a heavy-lift cargo plane that entered PLAAF service in 2016. "The Y-20 has a significantly larger payload capacity and range than the PLA’s previous heavy and medium-lift aircraft, which advances Beijing’s strategic airlift capability."

In 2018, China acquired from Russia the S-400 advanced surface-to-air missile system. "The S-400 has a 250-mile range, which could expand the PLA’s air coverage over the Taiwan Strait and other high priority facilities," Davidson warned.

China is learning how to use all this new weaponry. The PLA's peacetime deployments and war games are growing in scale and ambition, the admiral explained. "The PLA maintains a high operations tempo, primarily in and near China, but is quickly expanding its operating areas beyond the region."

"The PLA’s Naval Escort Task Force — now in its 31st iteration—follows its anti-piracy missions off the Horn of Africa by conducting naval diplomacy deployments to Europe, Africa and the South Pacific."

In the spring of 2018, "approximately 10,000 PLA marines traveled more than 1,200 miles as part of a large-scale exercise designed to improve long-range maneuverability," Davidson stated. "In April [2018], Beijing conducted a live-fire exercise into the Taiwan Strait with coastal artillery, and PLA Air Force bombers regularly circumnavigate Taiwan."

China "represents the greatest long-term strategic threat to a free and open Indo-Pacific and to the United States," Davidson concluded. "Through fear and economic pressure, Beijing is working to expand its form of communist-socialist ideology in order to bend, break and replace the existing rules-based international order."

Davidson said his own forces -- 375,000 personnel operating hundreds of ships and thousands of aircraft -- can deter Chinese aggression. "By fielding and maintaining a joint force ready to fight and win, [Indo-Pacific Command] reduces the likelihood that any adversary will resort to military aggression to challenge or undermine the rules-based international order."