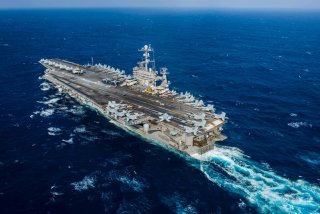 As Peter Suciu has reported, an argument is developing that the U.S. Navy ought to use the opportunity of the USS John C. Stennis (CVN-74) refuel to change the name of the aircraft carrier to something more appropriate for the current political climate.  Stennis was an unapologetic racist and segregationist, redeemed only (in the eyes of the Navy) by his friendliness to greater naval appropriations.

The problem with the Stennis name is not simply that it honors a dedicated white supremacist and defender of segregation; it is that few outside the United States (and indeed, few within the US) have any idea who Stennis was. Given that aircraft carriers are tools of political and diplomatic statecraft, having to explain the relevance of Stennis to a foreign audience is more than awkward; it’s an embarrassment in non-white countries.

The Navy’s approach to naming aircraft carriers is, to be kind, almost wholly incoherent from a historical perspective.  The first aircraft carrier, USS Langley, was named for Samuel Langley, an inventor and scientist who served as Secretary of the Smithsonian Institution.  The next two carriers (Lexington and Saratoga) were named after battles in the Revolutionary War, a pattern followed by Yorktown (CV-5) and Enterprise (CV-6). Other early carriers were given names from US naval history, including Ranger (CV-4), Wasp (CV-7), and Hornet (CV-8).  From that point, the Navy has tacked between a variety of traditions. Fortunately, this means that there are multiple good options for renaming the Stennis.

Beginning with USS Yorktown (CV-10), the United States Navy began to name aircraft carriers after previous carriers that had been lost in combat.  USS Hornet (CV-12), USS Lexington (CV-16) and USS Wasp (CV-18) followed this tradition.  The Forrestal class aircraft carriers carried it on, adopting the names Saratoga (CV-60), Ranger (CV-61), and Independence (CV-62), all in honor of carriers that had survived World War II. The Navy has not entirely abandoned this tradition, instead transferring it to the large flat-decked amphibious assault ships.  Most of the Wasp-class are named after Essex- or Independence-class ships from World War II, although some (Makin Island, for example) take their names from smaller escort carriers.

In sum, numerous distinguished carrier names are available for redubbing Stennis, including Hornet, Lexington, Yorktown, Ranger, and Saratoga, all warships that served with great distinction in World War II.  USS Coral Sea, in honor of the Battle of Coral Sea and also of the Midway-class carrier that served from 1947 to 1991, is also available. The ersatz Hornet, Lexington, and Yorktown are currently museum ships, but memorialization has not prevented the re-use of battleship names such as North Carolina, Texas, Alabama, and Massachusetts.

Beginning with USS Franklin Roosevelt, the second ship of the Midway-class, the U.S. Navy began to name aircraft carriers after Presidents.  This trend continued haphazardly through the USS John F. Kennedy, a Kitty Hawk-class carrier, and USS Dwight D. Eisenhower before becoming more or less the preferred naming convention by the middle group of the Nimitz class nuclear supercarriers.  CVN-78, the lead ship of the latest class of supercarriers, is named in honor of Gerald Ford. There are several Presidents now available for naming, including notable two-termers William J. Clinton and Barack H. Obama.  Indeed, the Navy may have chosen the name Dorie Miller for CVN-81 in order to avoid the controversy of naming a new carrier after Clinton or Obama during the Trump administration, given Trump’s fraught relations with both former Presidents.

If the Navy decided to avoid the obvious difficulty of re-naming a carrier after a living President, it has the readily available choice of Ulysses S. Grant, the US Army general who played the decisive role in the defeat of the Confederacy and the end of the institution of slavery in North America.  Grant’s name was used for a Cold War SSBN, but given his historical importance, few are likely to complain about renaming the Stennis in his honor.

The Navy has a long-established tradition of naming aircraft carriers after non-Presidential heroes, beginning with the aforementioned Samuel Langley.  Other carriers including Franklin (CV-13), Hancock (CV-19), Wright (CVL-49), Forrestal (CV-59), and Nimitz (CV-68) followed this convention.  Both Stennis and Vinson were justified under this convention, given the contributions that the legislators made to funding the Navy during the Cold War.  Doris Miller (CVN-81), named after a Congressional Medal of Honor winner from World War II, follows this tradition.

US naval history offers many examples for giving Stennis a more appropriate name;

USS King (after Fleet Admiral Ernest J. King) has been available since 1991.  However, in accordance with the example set by Dorie Miller, which recognized under-represented minorities in the US Navy, the best option might be the USS Ernest J. Evans, captain of the destroyer USS Johnston at the Battle off Samar.  Evans, a Naval Academy graduate who was three-quarters Native American, won the Congressional Medal of Honor but lost his life in combat against a massively superior force of Japanese cruisers and battleships.

Naming one of the most powerful symbols of America’s military and political might after a segregationist senator from Mississippi was an avoidable mistake.  Fortunately, the refueling of CVN-74 offers the USN a unique opportunity to correct that error.

Robert Farley is a Senior Lecturer at the Patterson School of Diplomacy and International Commerce. His work includes military doctrine, national security, and maritime affairs. He writes at Lawyers, Guns and Money and Information Dissemination and The Diplomat. Follow him on Twitter:@drfarls.