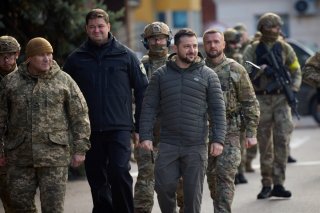 Ukrainian president Volodymyr Zelenskyy on Monday made a surprise visit to the newly freed city of Kherson, the New York Times reported. “This is the beginning of the end of the war,” he said to a crowd of hundreds of people, as many cheered and shouted, “Glory to Ukraine.” “We are step by step coming to all the temporarily occupied territories,” he continued.

Zelenskyy, who only stayed for about ten minutes, was surrounded by dozens of soldiers and police officers carrying rifles, underscoring the daring nature of the unannounced visit.

The liberation of Kherson, seen as a vital Black Sea port and a gateway to Crimea in southern Ukraine, represents perhaps the most significant success by Zelenskyy’s forces since Russia’s full-scale invasion was launched in late February. Last week, Russia ordered the withdrawal of its forces as Ukraine’s military bore down on the city and later took complete control.

In his nightly address over the weekend, Zelenskyy vowed to push Russian forces out of all occupied regions. “In those cities and villages that are still under occupation—we don’t forget anyone, we won’t leave anyone,” he said.

“Thanks to our defense operations and diplomacy, we will definitely reach our state border—all sections of the internationally recognized border of Ukraine,” he added.

Zelenskyy also noted that “investigators have already documented more than 400 Russian war crimes, and the bodies of both civilians and military personnel have been found” in Kherson.

“In the Kherson region, the Russian army left behind the same atrocities as in other regions of our country. We will find and bring to justice every murderer. Without a doubt.”

Alina Samofalova, who works at a human resources agency in Kherson, traveled to the main square on Monday, unaware that Zelenskyy would appear.

“I am so excited he came. When the orcs were here, it was a gray mood like a black-and-white movie,” she told the Times, using a common insult to refer to Russian soldiers. “Now, it is like the sun is shining over the city.”

Per NBC News, Oleksiy Hodzenko, a Ukrainian Ministry of Defense spokesman, received plenty of thanks and hugs from well-wishers in Kherson.

“The flags, they must have been hiding them for months, some of them underground,” he said. “Now people are happy as they understand that life is coming back. Where there is Moscow there is no life, only death.”

Steve Andre, who is from Detroit, Michigan, told the news outlet that he joined the Ukrainian army as a volunteer two months ago. On Monday, he was shaking hands and signing autographs.

“It’s incredible, you kind of feel like a rock star,” he said. “We’re incredibly happy but we’re bittersweet about it—this is a liberated city but we’ve paid for it with our blood and that’s important for us to remember.”