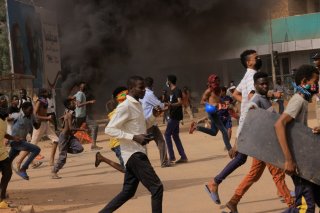 At least 150 people were killed in southern Sudan from Wednesday to Thursday following an outbreak of ethnic violence there—the worst violence the country has experienced in months.

“A total of 150 people, including women, children and elderly, were killed between Wednesday and Thursday,” Abbas Moussa, the director of the Wad al-Mahi hospital in the southern city of Damazin, claimed on Thursday, according to AFP. “Around 86 people were also wounded in the violence.”

The ethnic tensions in southern Sudan—particularly in its Blue Nile state, where Damazin is the capital—originated over an ongoing land dispute between the Hausa, the majority ethnic group, and various minority groups. The fighting over the two-day period was concentrated around the Wad al-Mahi area near Er Roseires, roughly 300 miles to the southeast of Khartoum, Sudan’s capital.

Inter-ethnic violence in southeastern Sudan has worsened in recent months as the country’s ruling military junta under General Abdul Fatah al-Burhan has struggled to govern effectively. A series of tribal clashes erupted in the Blue Nile region in July, resulting in roughly 150 deaths over the next three months. Renewed fighting between the Hausa and neighboring tribes began on October 13, causing an additional thirteen deaths, according to the UN Office for the Coordination of Humanitarian Affairs (OCHA).

While the fighting that began in July primarily involved the Hausa and the Berta tribes, the participants in the most recent round of violence have not been established. The Hausa originate from West Africa and are primarily found there, making up the plurality of the population of Nigeria. Due to its foreign origins, the Hausa sometimes experience discrimination within Sudanese society and have faced ongoing conflicts with other tribes in southern Sudan regarding land ownership.

Tribal clashes have also erupted in other parts of Sudan. In the West Kordofan province, violence between the Misseriya and Nuba people resulted in nearly twenty deaths over the past week. According to OCHA, the governor of West Kordofan visited several violence-affected areas on Tuesday but was forced to leave after his party came under artillery fire.

Eddie Rowe, the UN humanitarian coordinator for Sudan, claimed that he was “deeply concerned” about the most recent wave of ethnic violence in the southeast. Rowe noted that the violence had led to an estimated 170 deaths and 327 serious injuries, although he emphasized that the UN had not confirmed these numbers.