Walther CCP M2 Review: Is It a Win for Concealed Carry? 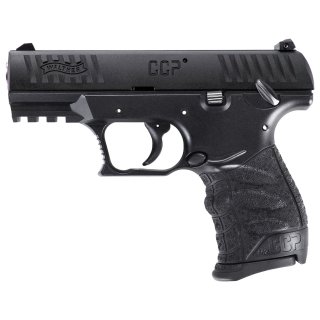 The Walther Concealed Carry Pistol (yes, that is the name), has high peaks and some deep lows. The CCP comes back solving some issues of the M1, but does that bring it up to other handguns at the same price?

Walther has a strong understanding of how to have their guns shoot straight. The CCP has a short barrel coming in 3.54 inches, but man it was like I was using an expensive precision barrel, and bringing my sights up was a breeze. Hitting those tight groups with this firearm made me feel like a pro! I cut down my grouping distance by a half-inch! I don’t think you can ask for more with a short barrel like that, especially with the smooth recoil system. The recoil system is the main reason for this. The SoftCoil Technology makes it easy to shoot accurately and is the biggest contributor to accuracy. With this weapon’s accuracy, you can expect to be consistently putting shots on target in tighter groups and since this is a weapon for concealed carry, a good shot group could save your life.

In my time with this weapon, it didn’t jam or misfire at all. Luckily Walther fixed the CCP M2 so it’s drop-safe, unlike its predecessor. It runs fine as long as you’re using normal pressure loads. If you have big hands your thumbs might ride the slide release occasionally. Other than those two minor issues, the CCP is off to a decently strong start, but don’t open your wallet just yet.

The CCP’s handling is, well, a mixed bag. Here you can start to see some of the design choices failing to be effective, namely in disassembly, but we’ll get there in a moment. This gun was designed for comfort, and they succeeded on that front. The grip is just crazy comfortable, you get that feeling that this pistol was specifically made for your hands. I’m sure the ergonomic shape helped me shoot better as well. All the functions were in the right locations for me with medium hands. It felt natural to handle and shoot. Luckily, Walther fixed the glaring issue of field stripping from the M1. It used to be that the disassembly was just so weird and needlessly complex. I’d been able to field strip most pistols without instruction, but not that one. There is no way the average shooter was gonna know how to take that thing apart. To stack on that point, a tool was also required, which is minor but still a negative in my book. Walther was on top of things though and simplified the process by a huge margin. No more takedown tools! I was so happy to be able to take it apart with no issues. There is an issue that can’t be overlooked though. Here’s the big problem; the frame heats up incredibly fast making it too hot to touch without gloves. The comfort of this weapon is great, but the frame heating just makes it unwieldy and a pain to use for long days at the range. I did truly enjoy shooting this weapon though, even through its flaws.

The bang switch on the CCP is serviceable, but nothing to write home about. Like many striker-fired pistols, this has a pretty squishy trigger, but that’s to be expected. The take-up is long and it needs to go all the way back to its starting position to reset which is something I’m not a fan of. The trigger does its job, just not with grace and beauty. I would personally explore changing out the trigger on this one.

I must say, I was disappointed by the magazine size, especially for the width and height of the weapon. 8+1 just is too little for a compact pistol. My Glock 43x is a subcompact and holds 10+1 with a smaller frame, so the tradeoffs just don’t work for me. Reloading is just the same as any shooter would be used to. All of the mechanisms work fine and I didn’t have any issues with reloading.

The length and weight of this weapon are great for concealed carry! I don’t have any complaints. Coming in at a length of 6.41 inches and a weight of 20 ounces (unloaded), it’s lightweight and easily concealable, not to mention more comfortable on your person. The only gripe is mostly related to the magazine. This gun is a comparable size to the Glock 43x and holds fewer cartridges. I was hoping that a gun of its size would hold 10 to 12 rounds, but that is more of a magazine design issue. The length and weight of this weapon are easy pros to me.

I have to say, the SoftCoil system works like a dream. The CCP has some super soft recoil, probably one of the softest of the 9mm I’ve shot. This made my follow up shots much quicker with better precision. I didn’t need to fight their weapon system or change my grip to shoot straight. Walther did excellent with recoil mitigation this time around and the system is mechanically intriguing if you’re into that type of thing. With the gas piston system minimizing recoil, there’s another benefit as a result of SoftCoil tech. Racking the slide is much lighter because the recoil spring doesn’t need to be so heavy. This is certainly beneficial for those that have troubling cocking their weapons like new shooters. Walther’s system is a huge plus if you’re looking for something with minimal kick.

The Walther CCP M2 is hanging at a very affordable $399 right now. If you’ve been liking what I’ve been saying, then it’s a steal. If you don’t have a vested interest in Walther firearms, then I would explore similarly priced options before you go with this pistol.

The Walther CCP M2 is a decent gun, but I just prefer other firearms in the same price range. The more I thought about it, the more the mag capacity bothered me. I found myself missing my Glock and its extra two rounds. I wouldn’t make fun of you for carrying this, but I can’t recommend this over other options if you’re getting this with the purpose of concealed carrying. It’s a lot of fun to shoot but lacks in some crucial areas. The Walther CCP M2 fixed some problems of the M1 but just isn’t up to spec for me.