War Ready: U.S. Pledges to Defend ‘Every Inch’ of NATO 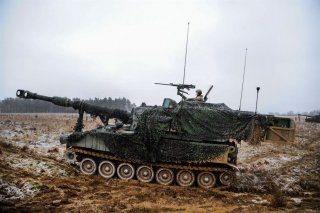 The United States on Thursday reiterated its pledge to protect “every inch” of NATO territory, according to a new Reuters report.

“We are committed to defending every inch of NATO's territory—if and when it comes to that,” said Defense Secretary Lloyd Austin, who spoke shortly before attending a meeting of NATO’s senior body on nuclear-related issues.

The alliance did not divulge details regarding the nuclear discussions, but it did note that its nuclear policy is under “constant review, and is modified and adapted in light of new developments.”

NATO also confirmed that it would go ahead with its annual nuclear preparedness exercise called “Steadfast Noon” next week, in which NATO air forces practice the use of U.S. nuclear bombs based in Europe with training flights.

Austin’s comments come as Russian president Vladimir Putin has repeatedly alluded to nuclear escalation against Ukraine as the military situation has deteriorated for Russian forces in recent weeks.

“I want to remind you that our country also has various means of destruction ... and when the territorial integrity of our country is threatened, to protect Russia and our people, we will certainly use all the means at our disposal,” Putin said in a televised address last month. “It’s not a bluff.”

Reuters reported that a senior NATO official claimed on Wednesday that a Russian nuclear strike on Ukraine would “almost certainly be drawing a physical response from many allies, and potentially from NATO itself,” without elaborating further.

“Kyiv is well aware that such a step would mean a guaranteed escalation to World War III,” he said. “The suicidal nature of such a step is understood by NATO members themselves.”

On Tuesday, President Joe Biden said in an interview that he doesn’t think Putin will use nuclear weapons in Ukraine.

“Well, I don’t think he will,” the president told CNN. “But I think that it’s irresponsible for him to talk about it, the idea that a world leader of one of the largest nuclear powers in the world says he may use a tactical nuclear weapon in Ukraine.”

The threat of using nuclear weapons could lead “to just a horrible outcome. And not because anybody intends to turn it into a world war or anything, but ... the mistakes that can be made, the miscalculations, who knows what would happen?” he continued.