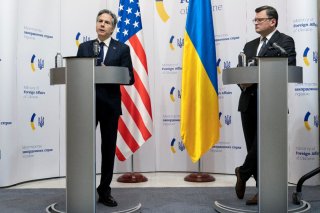 Nearly three months after closing down its operations in Kyiv and moving the U.S. Embassy to Lviv in western Ukraine, the State Department announced on Wednesday that it had reopened its services in Ukraine’s capital for the first time since the onset of Russia’s invasion in late February.

U.S. secretary of state Antony Blinken lauded the move in a statement, claiming that the embassy’s reopening was possible because of the bravery of the Ukrainian soldiers who have pushed Russian forces back from the suburbs of Kyiv after months of fighting.

“The Ukrainian people, with our security assistance, have defended their homeland in the face of Russia’s unconscionable invasion,” Blinken said. “As a result, the Stars and Stripes are flying over the Embassy once again.”

Blinken noted that the Russo-Ukrainian War continued in Ukraine’s east, particularly in its Donbas region, where Russia has sought to consolidate its hold on seized Ukrainian territory. The Russian invaders won a significant victory earlier in the week after the last defenders of the Azovstal steel plant in the besieged city of Mariupol evacuated or surrendered, placing the city fully under Russian control. Kyiv and western Ukraine continue to be sporadically targeted with Russian missiles, and Blinken vowed that the safety of U.S. diplomats and other embassy employees would remain the State Department’s highest priority. In his remarks, he announced that the State Department would apply “additional measures to increase the safety of our colleagues who are returning to Kyiv.”

The Senate also appears poised to confirm Bridget Brink, President Joe Biden’s nominee as Washington’s ambassador to Ukraine. That position has remained empty for almost exactly three years since former U.S. ambassador Marie Yovanovich was fired by former President Donald Trump in May 2019—an event that played a role in Trump’s impeachment trial later in the year. Brink, a former U.S. ambassador to Slovakia, has already received positive reviews from Kyiv and was supported by both Democrats and Republicans at her confirmation hearing on May 10.