Welcome to the Future: U.S. Navy Destroyers Are Getting Lasers 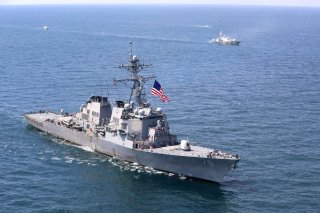 The U.S. Navy’s USS Preble, an Arleigh Burke-class destroyer, recently received a laser weapon system. The laser, called HELIOS, or High-Energy Laser with Integrated Optical Dazzler and Surveillance, is the first laser that will be integrated with an Arleigh Burke’s power and cooling systems and the ship’s Aegis Combat System.

A statement from Lockheed Martin, the company behind HELIOS, explained that Lockheed “delivered to the U.S. Navy a 60+ kW-class high energy laser with integrated optical-dazzler and surveillance (HELIOS), the first tactical laser weapon system to be integrated into existing ships and provide directed energy capability to the fleet.”

The statement added that “integrated and scalable by design, the multi-mission HELIOS system will provide tactically relevant laser weapon system warfighting capability as a key element of a layered defense architecture.”

“HELIOS enhances the overall combat system effectiveness of the ship to deter future threats and provide additional protection for Sailors, and we understand we must provide scalable solutions customized to the Navy’s priorities. HELIOS represents a solid foundation for incremental delivery of robust and powerful laser weapon system capabilities.”

Though the laser weapon system is not powerful enough to damage other ships, it could be a substitute for a close-in defensive weapon system and is powerful enough to disable small boats and drones. In addition, as a “dazzler” type laser weapon, HELIOS could also be used to distract or “blind” a variety of sensors on ships or missiles and adds another degree of protection to the vessel.

The Lockheed Martin statement explained, “HELIOS is a transformational new weapon system providing an additional layer of protection for the fleet with its deep magazine, low-cost per kill, speed of light delivery and precision response.”

Laser weapon systems will be more easily integrated onto large surface vessels than aircraft, as ships can generate vastly greater amounts of energy than a fighter jet or bomber.

Integrating a laser weapon system onto the Arleigh Burke-class destroyers comes as no surprise. The ships, though based on a Cold War-era design, have been steadily updated and modified and remain the backbone of above-surface American naval power. By mating a laser weapon to the ships, the U.S. Navy is keeping them relevant and combat-effective.

Though no ship-destroyer, laser weapons like HELIOS of increasingly higher power will make their way onto a wider variety of American surface vessels in coming years.