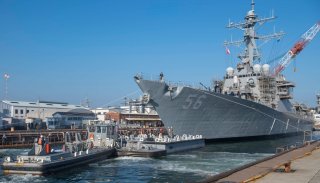 The USS The Sullivans completed a lengthy double deployment that saw the ship train with NATO allies.

The U.S. Navy ship USS The Sullivans, named after five brothers killed during World War II, has anchored at Naval Station Mayport near Jacksonville, Florida, bringing a long deployment to a close.

“Despite the dynamic schedule and demanding operational tasking, The Sullivans crew displayed resiliency, grit and determined self-sufficiency to accomplish all missions,” Cmdr. James Diefenderfer, Jr., The Sullivans’ commanding officer, explained in a U.S. Navy statement. “We are incredibly proud of our team’s accomplishments.”

The Navy’s statement explained that the ship navigated more than 20,000 nautical miles during the deployment, covering routes through the Irish Sea, the North Sea, the Baltic Sea, and port visits in the Netherlands, Spain, Portugal, and Denmark.

The Navy explained that for the first time in two years, a pair of U.S. Navy vessels participated in the exercise alongside a German Navy replenishment ship, a Royal Netherlands Navy frigate, and a Royal Danish Navy frigate.

“I want to recognize the incredible courage at home that our families demonstrated while we were deployed for 10 of the last 12 months,” said Diefenderfer. “It is not an easy task to send your Sailor over the horizon for such an extended duration, and we thank you for your unwavering support.”

Commander Diefenderfer referenced The Sullivans’ back-to-back deployments at sea, which is double the amount of time a U.S. Navy destroyer typically spends on station at sea.

“While we take time to recover and spend well deserved time at home, we are focusing our efforts on ensuring The Sullivans can continue to operate at peak performance for years to come,” said Commander Diefenderfer.

The commander added that “our immediate mission is the expert execution of our maintenance availability and continued training to prepare the ship and crew for future tasking.”

The Navy’s workhorse is the Arleigh-Burke class of destroyers. Initially built at the tail end of the Cold War in the late 1980s, the U.S. Navy has fielded the ships in several variants, or flights, and has periodically incorporated new technologies into the ships.

Despite the age of the design—the ships are over thirty years old—the guided-missile destroyers are potent and flexible multi-mission platforms. Moreover, the class has the most extended production history of any post-World War II U.S. Navy destroyer.

The ships are capable of launching land and surface-vessel strikes, as well as anti-submarine warfare. Thanks to their powerful Aegis Ballistic Missile Defense System and onboard radars, the ships can also perform an anti-ballistic missile and air defense role.