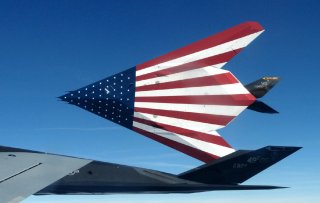 The "truth is in there" as in the Nevada Test and Training Range near Groom Lake, better known as Area 51. Where the name came from isn't even known, other than it may come from its close proximity to the Nevada Nuclear Test Sites – all the various test sites were divided into number-designated areas by the Atomic Energy Commission after World War II.

While "Area 51" doesn't exactly appear on any public map and still isn't fully acknowledged by the U.S. government, it isn't really the secret as movies and TV would have you believe. The CIA even officially acknowledged its existence in August 2013 – but offered little more.

There (likely) aren't alien spaceships at the base, but since 1955 when the Central Intelligence Agency (CIA) and the United States Air Force (USAF), along with defense contractor Lockheed Martin chose the then ultra-remote site to test the newest and most advanced aircraft, there have been rumors to what exactly goes on at "Area 51."

According to satellite images the base has runways that are up to 12,000 feet (2.3 miles/3.7km) long, which is important to note because some of the most advanced aircraft of the Cold War period were likely tested there. Some might have been so advanced these were mistaken for being "otherworldly," which likely only played into the mythos that Area 51 wasn't just an aviation test site.

Among the first advanced aircraft to take flight at Area 51 was the U-2 Dragon Lady, the reconnaissance aircraft that would reach an altitude of 70,000 feet, high enough – or so was the thinking – that it could avoid detection by Soviet radar. The plane achieved its first flight on August 1, 1955 and the plane went on to fly missions over the Soviet Union, Cuba, China and other communist bloc countries. In May 1960 it was proven – the hard way – that the plane couldn't fly high enough when the Soviets shot down a U-2 over the city of Sverdlovsk, capturing its pilot Francis Gary Powers in the process.

Likely one of the fastest planes to see testing at the site was SR-71 Blackbird, which was designed to address the Soviet's development of the high-altitude surface-to-air missiles that rendered the U-2 vulnerable. The plane, which was designed by Clarence "Kelly" Johnson, could fly high but more importantly, it was fast enough to outrun enemy air defenses. It remained in service for nearly two decades until the program was ended in the 1990s.

The two-seat SR-71 Blackbird was developed as part of Project Oxcart, which also saw the development of the single-seat Archangel-12, which completed its first flight over Area 51 in April 1962. To keep the A-12's existence a secret, the CIA reportedly briefed the head of the Federal Aviation Administration (FAA), who told air-traffic controllers to submit written reports of any "unusually fast, high-flying planes," rather than to mention such sightings on the radio. The speed of the aircraft leaked out and that coincided with the early reports of UFO sightings.

The F-16 might not seem like such a big deal, even if it is one of the world's most successful multirole fighters. But it had to be tested somewhere before it first took flight, and that was of course at Area 51. Even today the F-16 is used to test "acquired" aircraft at the facility.

As for the really top secret stuff – even a real flying saucer wouldn't be as cool as seeing the F-117 Nighthawk in action when it was being tested. Its sleek diamond-like surface could be mistaken for something other worldly. The futuristic aircraft first flew over Area 51 in June 1981 and because it wasn't publicly unveiled until late 1988 other than seeing an actual spacecraft from Star Wars this would have been as thrilling as it gets.

A more recent "futuristic" aircraft to see testing at Area 51 was the Boeing YF-118G Bird of Prey, an experimental plan that was named for its resemblance to the starship seen in the 1984 movie Star Trek III: The Search for Spock. It first tested at Area 51 in 1996 and made 38 flights before the program was completed. According to the National Museum of the U.S. Air Force, it was only meant to study stealth and new manufacturing techniques.