What We Know About the Marine Corps’ Advanced Reconnaissance Vehicle 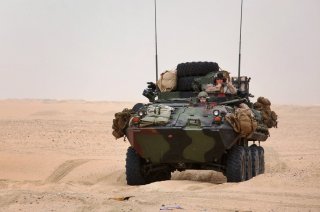 The United States Marine Corps is on the hunt for a new vehicle to carry groups of reconnaissance Marines around the battlefield. The current backbone of Marine armored reconnaissance, the Light Armored Vehicle, has been in need of an upgrade, and would struggle to survive in a modern battlefield against a similar vehicle.

The Congressional Research Service publication quotes the United States Marine Corps, explaining that “since the 1980s, the Light Armored Vehicle (LAV) has supported Marine Air-Ground Task Force missions on the battlefield. While the LAV remains operationally effective, the life cycle of this system is set to expire in the mid-2030s…”

The publication adds that “the Advanced Reconnaissance Vehicle (ARV) will be highly mobile, networked, transportable, protected, and lethal. The capability will provide, sensors, communication systems and lethality options to overmatch threats that have historically been addressed with more heavily armored systems.” Like its predecessor, the ARV will conduct “mounted and dismounted reconnaissance, surveillance, and security operations in support of maneuver,” as well as “offensive and defensive actions, deception, and raids to create decisive conditions for the Marine Division and the supported unit commander.”

Ideally, the Advanced Reconnaissance Vehicle will have a number of capabilities that overlap with those of the Light Armored Vehicle, as well as some capabilities above and beyond that the LAR could hope to achieve. Those that overlap include a medium-caliber gun, potentially in the 25mm to 30mm range, an armored capability that can defeat “close-in heavy armor threats,” a modernized command and control system, and good on and off-road mobility combined with a ship-to-shore capability.

However, the Advanced Reconnaissance Vehicle would also be expected to have organic unmanned aerial and ground systems that are deployable from the ARV, an advanced electronic warfare capability, and precision-guided munitions.

These capabilities aside, the Marine Corps envisions the Advanced Reconnaissance Vehicle as a group of systems rather than just one specific vehicle. The Marine Corps also explained that the capabilities described above would form the ARV’s Command, Control, Communications, and Computers/Unmanned Aircraft Systems variant.

The Marine Corps has two contractors in the running to prototype the Advanced Reconnaissance Vehicle: Textron Systems and General Dynamics Land Systems. Still, the commandant of the Marine Corps, General David Berger, has voiced some skepticism about the utility of an ARV-type platform which ultimately raises a few questions about the ARV’s future in the United States Marine Corps.