Who Will Bear the Cost of Biden’s Student Debt Giveaway? 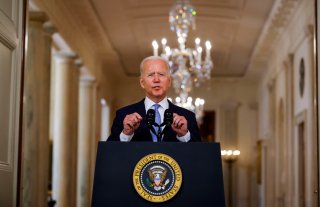 President Joe Biden’s decision to forgive by executive order hundreds of billions of dollars in student debt for some twenty-seven million former students poses a challenge to close observers of the political scene who try to rationalize the behavior of elected officials, particularly presidents, on some basis other than “politics as usual.” But maybe that’s the best explanation available. Let’s look and see.

Some scholars find it helpful to assume that public officials, like other normal human beings, are guided by incentives—benefits and costs—just like shoppers and businesspeople and anyone else taking part in ordinary activities. Nobel laureate James Buchanan, the founder of the field of study called public choice, dubbed this “politics without romance.”

Thinking in these terms makes it easier to see that politicians can more readily pass out favors when the group of recipients is concentrated and relatively small in number—like the dairy farmers in a typical state who want to have their milk products subsidized—and those who will bear the cost are large in number, widely dispersed, unorganized, and therefore hardly aware of what’s going on when they pay a few pennies more for a quart of milk.

This is not exactly the case with student debt forgiveness. The number of beneficiaries is unusually large and includes high-income voters dubbed “middle class.” And everyone, it seems, knows something is going on. Maybe it’s just raw politics. The midterm elections are not far away, and millions of voters have been given reason to look at their loan balances and smile in the direction of the party in power.

But there are still important parallels with the typical public choice observation, where Americans who are focused on their families and jobs rather than executive orders are made to pay for political favors.

The politicians delivering the goods have done so without dealing too much with taxpayer opposition. The handout was implemented by the swipe of the presidential pen rather than congressional debate, making it more difficult for the average person to figure out who exactly will replace government assets previously listed on the books as notes payable, but now donated away.

Yes, everyone knows someone, somewhere will pay for it, but we are less sure who that will be or when. Relatively few who fit the mold of social scientist William Graham Sumner’s “Forgotten Man“—those who go to work every day, pay taxes, and vote, but never engage in political favor seeking—will ascertain the answer. It could be them. Or is it just another case of letting future generations pick up the tab, somehow, for this generation’s political benevolence?

Sure enough, while much has been said about bailing out people who willingly took loans to raise their earning potential, hardly anyone is asking many financing questions. It’s like pennies—oops, thousands of dollars—from heaven. When someone did ask, Bharat Ramamurti, deputy director of the National Economic Council, gave a strange answer: “It’s paid for and far more by the amount of deficit reduction that we’re already on track for this year. We’re using a portion of that—a very small portion of it—to provide relief to middle class families.”

Can one really “pay” with reduced deficit money when the government is still in the red? And wait—did he say “middle class?”

Debt forgiveness is available to households earning no more than $125,000, or $250,000 by two earning members. The Economist indicated that 95 percent of U.S. households are under the threshold.

If there are indeed ways for a president to pay off Americans’ loan balances, what about cancer debt? Or pickup truck debt? If it must be student debt, why stretch the meaning of “middle class” so much? Pleasing elite members of society appears to be the common denominator.

One can find plenty of politics as usual here, but the public choice lesson should not be forgotten. And what if the Forgotten Man realizes what’s going on and, like many other citizens, decides the gains from government are larger than what can be earned from a few more days at work? Then, instead of quietly producing and paying taxes, more will decide to get on the Washington merry-go-round. Who will be left to pay?

Bruce Yandle is a distinguished adjunct fellow with the Mercatus Center at George Mason University, a dean emeritus of the Clemson College of Business and Behavioral Sciences, and a former executive director of the Federal Trade Commission.