Why the A-10 Warthog Never Seems to Go Away 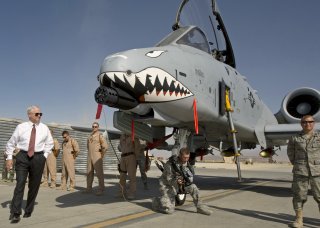 It is a classic and much-revered aircraft, which due to upgrades now operates with a digital cockpit, advanced targeting systems and a full complement of air-to-ground weapons to include rockets, bombs and missiles. It is built to literally linger at slower speeds above ground troops engaged in heavy combat and engineered with built-in redundancies to enable it to keep operating in the event that key portions of the aircraft sustain heavy enemy fire. A-10 Thunderbolt II, affectionately known as the Warthog, has been in service since the late 1970s and served as a close air support combat aircraft in conflicts such as the Gulf War, Operation Enduring Freedom, Operation Iraqi Freedom and Operation Allied Force in Kosovo.

For many years now, the Air Force has been working on various efforts to retire the A-10 aircraft as part of an evolutionary process of placing an F-35 jet in the role of performing close air support. The issue has, over the years, generated tremendous controversy, at one point leading the Defense Department to perform a specific close air support assessment test and comparison placing an F-35 jet against an A-10 aircraft in close air support missions. What’s interesting is that, despite various service efforts to sunset the aircraft and essentially fast-track its departure from the force the A-10 Warthog lives to fight another day. Many days, in fact, as some might consider it surprising that while the Air Force budget does call for the service to cut forty-two A-10s, what is more significant is the size of the force which remains. Despite any proposed cuts or reductions in the number of aircraft, the Air Force will still fly 239 A-10 airplanes, a slight decrease from its current size of 281 planes. Given these numbers, the larger story with the A-10 Warthog seems to be that, despite being migrated out of the fleet, the combat-tested aircraft is here to stay and potentially fly for many more years.

Several years ago, I spoke at length with an A-10 pilot who said that, even if the aircraft were to lose all of its electrical power, it can still fly, drop bombs and shoot its thirty-millimeter cannon. By virtue of being able to fly at slower speeds of three hundred, the A-10 aircraft can fly beneath the weather at altitudes of one hundred feet. This gives pilots an ability to see enemy targets with the naked eye, giving them the ability to drop bombs, fire rockets and open fire with the thirty-millimeter cannon in close proximity to friendly forces.

The A-10 airplane carries a full complement of weapons to include Joint Direct Attack Munitions, or JDAM GPS-guided bombs; its arsenal includes Guided Bomb Unit 38s, Guided Bomb Unit 31s, Guided Bomb Unit 54s, Mark 82 bombs, Mark 84 bombs, AGM-65 Maverick air-to-ground missiles, AIM-9 Sidewinder missiles and rockets along with illumination flares, jammer pods and other protective countermeasures. The aircraft can carry sixteen thousand pounds of mixed ordnance; eight can fly under the wings and three under-fuselage pylon station, Air Force statements said. The engines of the A-10 Warthog are mounted high so that the aircraft can land in austere environments such as rugged, dirty or sandy terrain, A-10 pilots explain. The engines on the A-10 airplane are General Electric TF34-GE-100 turbofans.