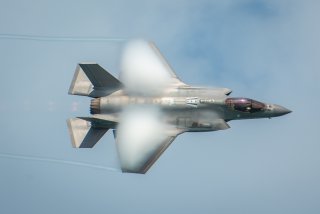 A new Mitchell Institute for Aerospace Studies report states that “stealth is the cost of entry into any modern battlespace” and must be included in the Air Force’s plan to build a fighter jet force that is prepared for the future of warfare.

The report, called Future Fighter Force Our Nation Requires: Building a Bridge, makes recommendations that seem to center upon a belief that the Air Force needs to preserve, improve and maintain its stealth weapons.

The study calls on the Air Force to cancel the F-15EX Eagle II, increase its F-35 fighter jets and launch a “new start” program to build another next-generation stealth fighter to replace the F-16 Fighting Falcon.

“Any future design, importantly, cannot sacrifice stealth, and it must optimize size, weight, power, and cooling (SWAP-C) capacity,” according to the study. “Stealth is the cost of entry into any modern battlespace, and the cost of that stealth has greatly decreased over time.”

Much of the attraction to stealth relates to the belief that even the most advanced and upgraded fourth-generation weapons cannot survive against new Russian and Chinese air defenses. The study argues for the preservation and improvement of stealth technologies and advocates for the creation of new generations of stealth weapons. Various defense industry sixth-generation design renderings provide a view into the future.

“The physical shaping, which accounts for a large portion of an aircraft’s signature, is eminently achievable with modern computing and processing,” according to the study. “As the Air Force moves even more into digital design, designing for stealth should become even easier.”

Blended wing-body shapes, embedded engines, embedded air ducts, internal weapons bays and heat-dissipating exhaust pipes are all indications of stealth technology. Less visible yet equally impactful variables include the use of radar-absorbent materials and heat-signature-reducing thermal management techniques. All of these can be explored, assessed and advanced through digital engineering—a process that has already produced significant results in the Air Force’s Next Generation Air Dominance program. Digital engineering contributes to the development of a new generation of stealth technology and allows the Air Force to accelerate the program.

The success of engineering sixth-generation weapons may hinge on the defense industry creating new, paradigm-changing stealth technologies. The promise of stealth-related innovations coupled with the success of stealth platforms is likely why the Mitchell report is so adamant and the need to evolve stealth.

“The service should not procure less than a full stealth capability,” the report states. “If the Air Force pursues its next clean-sheet design as less than a stealthy fifth-generation airframe purely as a means to achieve affordability, it will miss a key opportunity to build the force it needs.”