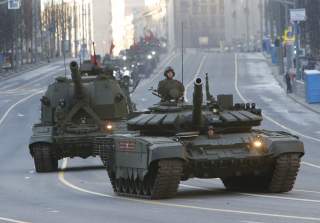 President Donald Trump loves a military parade. And so would Russian spies if Trump got his way.

In fact, American spies gleaned lots of valuable information from watching Soviet military parades during the Cold War. During those massive festivals of firepower such as the May Day march, Russia displayed its latest hardware as troops marched in impeccable formation past Soviet dignitaries, while Western analysts zealously tried to determine Kremlin politics by who sat where in the reviewing stands.

The theatrics were intended to impress the world with Soviet military might and show the impoverished Soviet public where their rubles were going. But for Western intelligence, they were a godsend. The Soviet Union was a tough place for spies to do their work. Surveillance was everywhere, and foreign visitors were watched closely. As for technology, spy planes like the U-2 could be shot down, while spy satellites had their own limitations.

Nonetheless, those military parades in Red Square provided much information. “High-resolution photography from overflights, satellites, and even handheld cameras enabled the West to take accurate measurements and gather important details of various components,” according to the National Security Archive, a nongovernmental watchdog group that has published declassified U.S. intelligence documents on the parades. “Additionally, identification of the participating military units contributed to order of battle intelligence. The presence of officials on the reviewing stand, their interactions, and speeches shed light on the nation’s political and military leadership, data coveted by Kremlinologists in the West.”

Of course, the Soviets know this. But like many authoritarian regimes, the Communists could not resist a chance to hold a military parade. “Although the Soviets were notoriously skittish about opening themselves up to surveillance of any kind and, as noted, sharply restricted travel and even photography by Westerners, those concerns apparently did not outweigh a collective sense of pride and a determination to show off their military prowess to the world,” the National Security Archive notes.

Sometimes the results were surprising. For example, a May Day parade in 1954 gave Western observers their first glimpse of the M-4 bomber (NATO code name “Bison”) and the Tu-16 bomber (“Badger”). A 1962 parade revealed three new ballistic missiles, the T-62 tank and a hitherto unknown anti-tank missile. The CIA documents display an engineer’s painstaking detail, with elaborate drawings as well as notes made of minor details such as the location of the radio antenna on missile launch vehicles.

On the other hand, the Soviets could use those parades to fool Western intelligence. The most notorious example was the infamous “bomber gap,” when during a 1955 parade, the CIA observed, “as many as 10 Type 37 [M-4 Bison bombers] at a time, flying in formation.”

“These sightings mean the Soviet heavy bomber program is substantially more advanced than we had estimated,” a CIA analysis warned, leading to a political outcry that the United States was falling behind Russia in bomber strength. Actually, all the Soviets did was fly a handful of Bisons over the parade, have them circle out of sight of bystanders, and then return as if they were another flight of planes.

So what would be accomplished if President Trump spends an estimated $92 million on a military parade in 2019? The American public might get to see a nice show to distract them from their other problems. Presumably, the United States would not show off its most secret hardware, though at a political spectacle like this, it’s easy to imagine the pressure on the Pentagon to show off its latest and greatest.

All of which would be much appreciated by Russian and Chinese spies.