Why Are U.S. Marines in Taiwan (Any Why China Won't Like It)? 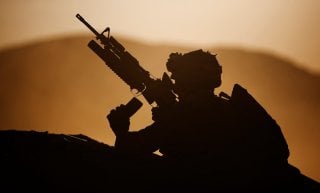 This week the Taiwanese government publicly acknowledged that members of the United States Marine Corps have begun training operations on the island nation. A unit of Marine Raiders was reportedly deployed to Taiwan to help boost Taipei's military readiness.

This was the first time since Washington and Taipei ended formal diplomatic ties in 1979—when the United States formally recognized the People's Republic of China—that the island nation has admitted the presence of U.S. forces.

According to Newsweek, which cited the Taipei-based United Daily News, the Taiwan Marine Corps will receive four weeks of training under the American Special Forces unit. The Raiders will reportedly provide training on amphibious assault operations and speedboat infiltration techniques at the Tsoying military base in the southwestern port city of Kaohsiung.

The Marine Raiders were believed to have arrived on the island nation as early as October 26, and subsequently observed two weeks of quarantine as part of the island's measures to contain the novel coronavirus. These are the first troops to conduct training with the Taiwanese military since the Covid-19 outbreak began earlier this year.

"In order to maintain regional peace and stability, routine security cooperation and exchanges between the militaries of Taiwan and the United States are proceeding as usual," the Taiwanese Navy said in a statement on its website.

Despite the acknowledgement from Taipei, the United States Department of Defense (DoD) on Tuesday refused to confirm if the Marines have been deployed to the island nation. Stars & Stripes reported that Pentagon spokesperson John Supple said in a statement to the news outlet via Indo-Pacific Command that reports about the Marines on Taiwan were inaccurate.

"The United States remains committed to our One-China Policy," Supple noted, referring to a policy acknowledging that Beijing believes it has sovereignty over Taiwan. Beijing maintains that the island is a breakaway province that would be brought under its control, even if force is required.

Despite the fact that Washington maintains no formal relations with Taiwan, which has a democratically-elected government, current U.S. law—the Taiwan Relations Act—requires that it ensures that Taiwan can defend itself. It has been in place for more than forty years, and ensures Taipei's defense needs.

"The United States will continue to make available to Taiwan such defense articles and defense services in such quantity as may be necessary to enable Taiwan to maintain sufficient self-defense capabilities," added Supple.

Last month, the United States Department of State approved a second weapons sale to Taiwan in just over a week. This most recent deal was for 400 anti-ship cruise missiles, worth a reported $2.37 billion. That followed the sale of three weapons systems in a separate deal worth $1.8 billion. It was the ninth weapons sale approved by Washington to Taipei since President Donald Trump was elected in 2016.

Despite the fact that Washington has not officially acknowledged the presence of U.S. troops in Taiwan for more than forty years, it is known that military exchanges had been commonplace prior to the Covid-19 outbreak.

U.S. Army Special Forces have been invited for annual joint sessions with Taiwan's equivalent Army Aviation and Special Forces Command in past years, while U.S. Army Green Berets had taken part in Operation Balance Temper, which took place in the mountainous regions in the center of the island nation. Additionally, U.S. Navy SEALs have trained with Taiwanese frogmen off the coast of the Penghu Islands during Operation Flash Tamper.