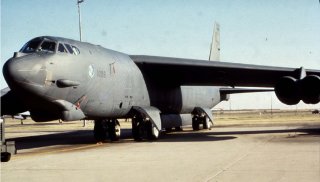 Key point: The B-52 force has been preparing for that mission for decades.

One hundred and sixty feet from tip to tail. One hundred and eighty-five feet across. Two hundred and forty tons of metal, fuel, bombs and human flesh traveling at 650 miles per hour. You wouldn’t think something so big, moving so fast, would also be capable of skimming the ocean surface at an altitude of just 80 or 90 feet, lower than the deck of an aircraft carrier.

The Air Force has started upgrading its 60-year-old B-52H bombers with the latest electronics, prepping the giant warplanes for another three decades as America’s most fearsome aerial weapon. In particular, the brass want the long-range bombers to help deter Chinese aggression in the Pacific and, in the highly unlikely event of major war, send Beijing’s hundreds of warships to the ocean bottom.

“We ended up sending a squadron's worth of B-52Hs to Guam,” Aitken recalled. “At Guam, the deployed crews immediately began training in the conventional missions they were not proficient in — sea surveillance, mine laying and conventional ‘iron bomb’ missions.”

Thirty hours and 30 minutes in duration, the bomber sorties became known as “Winchester missions” — deadly like the .30-30-caliber rifle.

The Air Force still occasionally practices very-low-level B-52 missions over water. An official photo from 2007 depicts one of the bombers flying over a U.S. Military Sealift Command maritime prepositioning ship during a maritime intercept training mission.