Why the Beretta APX is a Great Choice for Self-Defense 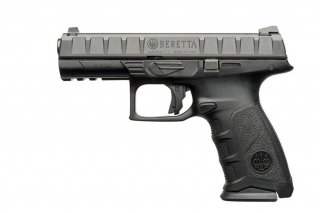 Originally made with law enforcement and the military in mind, the Beretta APX is still a good choice for civilian carriers. First designed in 2016, it refers to the “Advanced Pistol X,” with the X meaning the caliber pick of choice, ranging from 9mm to .40 S&W. If you want to know just why this pistol is called “advanced,” let me lay out the features of it for you.

You can expect accuracy from a pistol designed for law enforcement and military standards, and the APX is no exception. At about fifteen yards away I was able to get two-inch groupings with both calibers; which is very good for the cartridge sizes. The sights are three white dots that are well made, fitting on the barrel. The barrel itself is built with polygonal rifling, which provides a better gas seal, making the gun shoot with better accuracy.

You can tell from the get-go that the APX is built to last. The chassis is made from stainless steel, not plastic, for one, and for two it features easy disassembly. You can field strip this gun quickly as long as you follow the manual which lays out everything you need to know about taking it apart.

I’ve fired over a thousand rounds with the APX and I’ve yet to have it malfunction, but I’ve kept it properly clean. Even then, the easy disassembly makes it a walk in the park to do so. This is up there with the best in reliability, comparing in terms of quality to the Heckler & Koch VP9. You even get the option of the “Striker Deactivation Button” on the back of the pistol, which allows you to avoid pulling the trigger to disassemble your firearm. This is good practice and prevents accidental misfires, instrumental in gun safety.

The APX is geared towards the tactical crowd and you can tell; the grip is tight and deep, the gun is easy to control, and there’s even a rear sight for use shooting one-handed. The slide stop is ambidextrous and, overall, I think it’s a very comfortable gun to use. It’s small enough to fit into your jacket pocket, though I’d recommend a holster. Finally, it isn’t a chore to aim this gun for a prolonged period of time either.

The trigger has about six pounds of pressure put on it, which might seem a bit heavy to some, but it fits like a glove on the APX. Not just that, but if you want to wear gloves while shooting you can easily do so with a roomy trigger guard. The pull feels satisfying and the trigger itself feels great on an ungloved finger. If you want something of similar quality with a lighter trigger pull however, I’d suggest the Ruger 57 for a crisp fire.

The magazines on the APX are made of steel which adds a little weight but definitely makes the gun feel better. The high quality make of these adds to the ease of reloading. For instance, there’s witness holes to see how many rounds are left, and the spring inside is strong. The magazines are comparable to the CZ 75B, all in all. The standard capacity is high at seventeen-rounds, and you can get a fifteen-round for a more compact mag or a twenty-one-round for more bangs.

The APX weighs in at 28.2 ounces unloaded, which might seem a bit heavy, but I can tell you that I hardly noticed it. The total length is around eight-inches, similarly to the Springfield XD(M), with the barrel making up four of those.

The MSRP runs at $399.00 but you can easily find competitive prices at plenty of retailers.

If you’re looking for a gun that’s good for self-defense at home or just to take range shooting, the APX is pretty good all things considered. It’s more in the market for the tactical niche group, but it’s an overall well-rounded firearm. It’s not revolutionary or groundbreaking, but some smart design choices and a tight appeal make it a great addition to your collection.