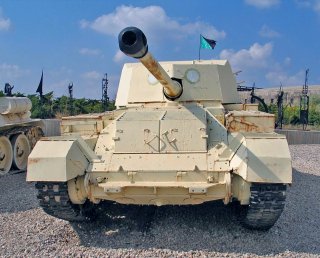 The British Army was the first to develop and deploy tanks during World War I, but by the outbreak of World War II its armored vehicles were in a word: lackluster. Throughout the war it subsequently developed tanks that range from the bad to barely adequate.

As the Imperial War Museum noted, “some were rushed into service too quickly and proved notoriously unreliable. Others spent too long in development, or only achieved a degree of usefulness after numerous modifications.”

That is why from 1943, British armored divisions were equipped en masse with the American Sherman, a tank that was nearly always outclassed by the opposition. However, it was reliable, adaptable and most importantly was available in large numbers.

Simply put the British—not to mention the Americans—fought World War II with tanks that were by and large “good enough.” Even then the British tank crews often used the unflattering nickname “Ronson” for the Sherman. It was a grim reference to the Ronson cigarette lighter’s ad slogan that proclaimed “lights first every time”—meant to note that a Sherman could burn after just one hit!

Yet, despite the mockery the British were no doubt happy to have the Sherman. There weren’t many other options. The British simply couldn't produce enough tanks, and as noted the ones that were produced simply weren't able to hold their own against the superior German Panzers.

The inter-war era tanks—which included such notable armored vehicles as the Vickers Medium MkII, Cruiser MkI and Matilda MkI—were largely obsolete by the time German blitzkrieged its way across the Low Countries and France. While at least a couple dozen of the Matilda MkIs were captured, none were used by the German Army—a practice accomplished with almost every other tracked vehicle. Clearly the Germans thought so little of the Matilda it wasn't even used in training. Back in the UK, the Cruiser and Matilda tanks were mainly relegated to training.

Efforts to find a tank that could be capable of taking on the Germans were largely fruitless in the early stages of the war. The Crusader was rushed into production in mid-1940 and quickly shipped to Egypt, where it proved reasonably effective against the invading Italian forces. While the standard German tanks used in the African campaign weren't significantly better, the Crusader couldn't be adequately up-gunned without reducing the turret crew to just two men. It also suffered from durability issues and by 1943 was largely replaced by the American Sherman.

Despite the setbacks the British military continued to develop a superior tank. Among the good efforts were the Valentine and Churchill tanks, which were based on an interior and chassis layout of the experimental model A10. The Valentine was developed in 1939, and by 1944 a total of 8,275 were built. It was stable and reliable but hampered by its small size, which meant it was easily outclassed by the latest German tanks.

The Churchill had a rough development, and several mechanical defects needed to be addressed. It went on to become one of the most numerous and versatile British tanks of World War II. Some fifty-six hundred were built and it was the most widely modified, with the Churchill being employed in a variety of nonstandard yet still vital roles.

It wasn’t until the very end of the war however that the British Army finally had a tank that was up for the fight. It was the Centurion. Six prototypes of the brand new tank were even hurried to the front in the hope that these could be tested in action. After years of struggle to produce a well-armed and well-protected battle tank the British succeeded but by then the Germans were defeated.

The Centurion remained the best tank in the early Cold War and it saw use in the Korean War, the Suez Crisis and notably the Six Day War where it was used by Israeli as well as Egyptian and Jordanian forces. In the Indo-Pakistani War of 1965 the British-made Centurion proved superior to the American M48 Patton. Even now, seventy-five years after the end of the war derivatives are still in service around the world.