Why Is China Building So Many Different Types of Weapons? 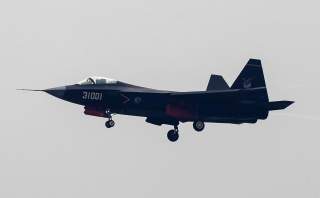 China’s effort to build more types of weapons, in all categories imaginable, than the entire world combined, begs more than just a cost-benefit analysis. It might be better to think in terms of an environmental impact study with only one question: just how many people does Beijing plan to kill?

There are various theories about the rampant growth of redundant programs and seemingly wasteful spending by China’s military-industrial complex.

The recent China Airshow in Zhuhai was the perfect example. China displayed a full court press of new weapon systems and capabilities. Even the China Shipbuilding and Offshore Co. is getting involved in the land warfare business, as was clear by displays of road-mobile air defense systems.

The exhibition revealed that China’s militarization efforts are in “full swing” and the airshow itself was “designed explicitly to impress and intimidate,” said Paul Giarra, the president of Global Strategies & Transformation.

Nothing has put the fear of God in the U.S. Navy like the growth of China’s anti-ship cruise missile (ASCM) efforts, particularly the DF-21D anti-ship ballistic missile program.

“With things like anti-ship cruise missiles and surface-to-air missiles, China is simply throwing a lot of money at a lot of different projects, simply because it has the money,” said Richard Bitzinger, a visiting senior fellow at Military Transformations Program at Singapore’s S. Rajaratnam School of International Studies.

The near-exponential increase in defense spending over the past twenty years has given the military billions more in funding for research and development (R&D). “Plus, a lot of these programs, particularly ASCMs, are actually of different types: different ranges and different uses,” he said.

Still, China now produces such an assortment of new anti-ship cruise missiles (ASCM) that sorting out old from new developments and designations is bewildering.

The Airshow showed off a model of the new road-mobile supersonic CM-401 ASCM. Also shown was a fully operational road-mobile BP-12B ASCM, the latest iteration of a land-warfare surface-to-surface missile system that began as the 150-kilometer-range P-12, then later as the 280km BP-12A. There was also an unveiling of the air-launched HD-1 supersonic ASCM, which might be an export variant of the YJ-12, now being considered by Pakistan.

China’s redundant ASCM and UAV programs are under development not just by state-owned entities, such as AVIC, CASC, CASIC, and CETC, but also by a variety of start-ups and university-based companies, said Roger Cliff, senior research scientist at CNA. The development of comparable types of weapon systems without a known buyer or overseas market is “bizarre . . . something you rarely see in the West.”

Vasily Kashin, a Russian specialist on China’s arms industry, said the abundance of ASCMs are “just leftovers from China's intense anti-access/area denial R&D programs, which do not tend to sell very much, but still quite good to flaunt it.”

Kashin, a senior research fellow at the Russian Academy of Sciences, is a Zhuhai Airshow veteran. The plethora of ASCMs and UAVs on display are part of China’s “let a hundred flowers bloom” philosophy within its military-industrial complex.

“My feeling is that much of what we see is a product of China’s closer civil-military integration process,” Kashin said. “By getting private firms to participate more with defense R&D, China will see many more prototypes reaching the sales stage even though there might not be a huge market. In the process, though, the PLA [People’s Liberation Army] can cherry pick the very finest products for themselves.”

Cliff suggested there might be one possible success story in China’s fighter aircraft program, in which two aircraft competed for the air force’s stealth fighter requirements. Unconfirmed media reports hint that the Chinese air force plans to procure the J-31, in which the Shenyang Aircraft is thought to have developed using its own funds after the air force initially supported the J-20, built by Chengdu Aerospace.

Even though the Chinese defense industry is “pretty monolithic” there is a “lot of competition inside each sector,” Bitzinger said. As an example, within AVIC, there are two major combat builders, Shenyang and Chengdu, and “they frequently compete with aircraft projects, such as the J-8 vs. J-10 and J-20 vs. J-31.”

This is China’s traditional approach to reducing the technological risks caused by the weakness of the domestic industrial base, Kashin said, which has a history of simultaneously developing two systems.

Kashin said that the first one would be a high-risk project, usually expensive, innovative and involving imported components. The second, a less ambitious low risk project suits the minimal requirements of the PLA, which can be accomplished without external help. As a result, the PLA would get the new systems even if the external supply chain is disrupted or the project fails.

Even if the propagation of so many weapons is a calculated government strategy or evidence that the military-industrial complex has “run amok,” it has potential to cause chaos on the international scene, said Robert Haddick at the Mitchell Institute for Aerospace Studies, Air Force Association.

Top Chinese government leaders see themselves in competition with the United States for influence in key countries around the world. They see the large U.S. presence in arms exports to vital countries in Africa, Asia, Europe, Latin America, and the Middle East, as a form of U.S. global influence that China needs to counter, he said.

If China displaces the United States as the preferred arms supplier that would shift economic and diplomatic influence from Washington to Beijing. China’s military industry might think it is “mature enough to take on the U.S. defense industry and prevail,” Haddick said.

Chris Pocock, another Zhuhai Airshow veteran and UK-based aerospace specialist, said the Chinese have no moral scruples about exporting to renegade, corrupt and unstable states that the West will not supply. China is a dream for despots, as China provides “low acquisition costs and, of course, cheap loans.”

Giarra believes that China is in a “race with the United States and the rest of the world.” In the past, this would have been known as an arms race, but it really does take some competition for it to be a race, he said.

“So far, the United States is discussing the possibility, but has not yet laced up its running shoes . . .[though] it is becoming more apparent than ever that budgets do not equate to buildups in the United States.”

Wendell Minnick is a Taipei-based journalist who has spent two decades covering military and security issues in Asia, including one book on intelligence and over 1,500 articles. From 2006-2016, Minnick served as the Asia Bureau Chief for Defense News, a Washington-based defence weekly newspaper. He has edited over ten books on Chinese military equipment.