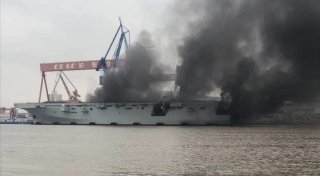 China’s first helicopter carrier burst into flames at the Hudong–Zhonghua shipyard in Shanghai on April 11, 2020, possibly delaying the vessel’s entry into service.

Social media users first reported the fire aboard the Type 075 landing ship dock. Photos that circulated on-line depicted smoke billowing from the 778-feet-long assault ship, the first in a planned class of at least three such vessels.

The ship at the time was fitting out ahead of imminent trials prior to joining the front-line fleet. A sister vessel is under construction at the same shipyard. The Type 075 is similar in size and mission to the U.S. Navy’s 10 Wasp- and America-class assault ships and, with its helicopters and hovercraft, could land troops on hostile beaches.

The Type 075 presumably would play a major role in a Chinese attack on Taiwan.

The images that appeared online on April 11, 2020 suggested that the fire burned inside the Type 075’s hull, perhaps in the ship’s expansive below-deck hangar. “Smoke came out of the open aircraft lift near the front of the island superstructure,” naval expert H.I. Sutton wrote. “Smoke also came out of the rear hangar opening. For a time a massive cloud of smoke rose high into the air, and would have been visible for miles around.”

Firefighters raced to battle the blaze. No injuries were reported. “It seems as if the fire was quickly put out but how it will affect the ship's schedule is not clear now,” aviation expert Andreas Rupprecht noted.

“Overall I do not expect a major delay,” Sutton wrote.

That’s certainly the impression the Chinese government hoped to create. Just a day after the fire, images appeared online depicting the same Type 075 with no apparent damage.

It’s unlikely that the shipyard could repair and repaint the ship so quickly. “At least hedge your statements so people don’t take it as fact,” The War Zone editor Tyler Rogoway tweeted in response to social media users who appeared to buy Beijing’s claim.

“Way too much uncorroborated [open-source intelligence] stuff gets passed around as fact and blindly retweeted,” Rogoway added.

Shipyard fires are a major problem, and not just in China. Fires have damaged American warships in recent years. Most notoriously, in December 2019 a blaze broke out aboard Russia’s sole aircraft carrier Admiral Kuznetsov after diesel fuel ignited on a lower deck.

Kuzentsov at the time was pier side in Murmansk for pre-planned repairs following a disastrous 2016 deployment to the Syrian coast, during which two of her aircraft crashed.

The Kuznetsov blaze spread to cover 6,500 square feet as firefighters struggled to contain it. One person died and 10 were injured in the fire, TASS reported. Six landed in intensive care.

The fire was the latest in a series of mishaps to afflict the 35-year-old, 60,000-ton-displacement flattop. The Russian navy plans to dry-dock Kuznetsov in 2020 and conduct extensive repairs on the aging, unreliable vessel in order to extend her service life by a few more years.