Why Did Game Of Thrones' Biggest Battle At Winterfell Go So Poorly For Humanity? 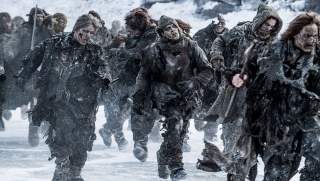 Key Point: Why did humanity not come up with a better strategy?

The Game of Thrones episode "The Long Night" features the last stand of a fantastical medieval army against an implacable horde of White Walker zombies led by the chilling undead Night King.

It also showcases a series of terrible command decisions made by its protagonists, Jon Snow and Daenerys Targaryen, squandering their forces lives in poorly thought-out gambits.

These episodes of military ineptitude may be one of the TV show’s most believable attributes, reflecting real-world military disasters. As such, a battle featuring a zombie horde and fire-breathing dragons offer surprising insight into classic errors in battlefield command.

Failing to Act Cohesively Against the Enemy’s Center of Gravity

Carl von Clausewitz, the grandfather of modern Western military theory, wrote in On War that it was vital to identify and strike at the enemy’s “center of gravity”—that is, “the hub of all power and movement, on which everything depends.”

That ‘center of gravity’ varies based on the nature of the adversary—it could be an enemy capital, a charismatic leader, or a strategically-deployed army.

In the episode prior to the battle, Jon and Daenerys correctly identified the Night King as the center of gravity, as the White Walkers have no will to fight (or ability to remain animate) without their leader. However, so long as the Night King lives, he can replenish his army’s losses extremely quickly and cheaply by reanimating the dead.

Unfortunately, Jon and Daenerys’s battle plans are incoherent. They employ their dragons to personally hunt the Night King, but commit the rest of their troops to fighting a conventional defensive action predicated on the Night King evading their dragons and entering an ambush on the ground. Thus, they fail to ensure their forces are all acting upon the center of gravity with a common strategy.

Allowing Infantry, Cavalry and Artillery to Act Without Mutual Support

The humans at Winterfell field a balanced combined-arms forced including infantry, cavalry, artillery and air support. Such a force has tools to deal with virtually any situation—if its elements work in concert.

However, the defenders of Winterfell fail to coordinate their separate arms, and each is defeated in turn without support from the others.

The battle begins with a charge of the Dothraki cavalry. On its face, this is understandable: cavalry is most effective when it can maneuver and build up momentum over open ground.

Yes, the shock of an assault may overwhelm poorly-trained conscripts or a weakly defended sector of a frontline, potentially breaking through and spreading panic into the rear.

But if assaulting a strong position, cavalry or armored forces are likely expend their shock effect without achieving a breakthrough—and soon find themselves outnumbered and surrounded by counter-attacking foes.

For example, early in the 1973 Yom Kippur War, unsupported Israeli tanks barreled into ambushes by Egyptian infantry armed with long-range anti-tank missiles and suffered devastating losses. These ambushes could have been avoided with proper reconnaissance and support from infantry and artillery.

Incredibly, Winterfell’s defenders fail to dispatch outriders to scout out the disposition of the approaching White Walkers. However, given that Jon knew the White Walkers are incapable of panicking and had limitless reserves, he could have guessed that a cavalry charge would fail to achieve decisive effects.

Instead, the Dothraki should have been deployed on the flanks, forcing the Night King to either split his forces to chase after them, or expose his own flanks to Dothraki hit-and-run attacks. The cavalry’s superior mobility would allow them to avoid getting stuck in unwinnable fights, and strike when and where their enemies are vulnerable.

The deployment of the catapults in front of the infantry, where they are immediately overrun, is also perplexing. As indirect-fire weapons, they do not require line-of-sight to their targets. Had they been arrayed behind the frontline, they could have continued blasting holes in the White Walker ranks for a prolonged period.

But ultimately, dragon-based CAS operations fail to achieve decisive effects. Why? Jon and Daenerys are confronted with problems that have long frustrated military pilots: it’s hard to identify targets on the ground when flying thousands of feet above the battlefield—particularly at night and in inclement weather conditions. Likely, Jon and Daenerys’ strafing runs were particularly curtailed for fear of friendly fire incidents.

Low-visibility conditions were worsened by a blizzard conjured by the Night King, just as modern militaries employ electronic warfare to fog radar and communication links.

Hovering close to the ground to get a better picture of the action, meanwhile, exposes Daenerys’ dragons to attack, just as low-and-slow flying aircraft become vulnerable to numerous short-range air defense weapons.

Winterfell’s ground troops lack Forward Air Controllers to signal when and where air support is needed. Even Ser Davos’ pre-arranged signals to summon a dragon-strike go unheeded. For their part, Daenerys and Jon fail to use their mobility to perform reconnaissance overflights and facilitate command and control of their dispersed ground forces.

Enemy counter-air operations undertaken by the Night King on his zombified-dragon also disrupt Winterfell’s aviation. Since the first air battles of World War I into the modern age of stealth fighters, the side which detects its adversaries and attacks first is far more likely to prevail in aerial battle. Daenerys’ dragons struggled to locate their adversary, and eventually climb to very high altitudes seeking a spotting and energy advantage, as higher altitude can be converted into speed by diving.

This comes at the expense of maintaining situational awareness of events on the ground.

Ultimately, the air-to-air action proves inconclusive—a favorable outcome for the Night King, as Winterfell’s forces depend more on air support than his own do. Daenerys should have devised better means to coordinate with her ground forces. Rather than chase after an elusive enemy, she should have dedicated one dragon to CAS while another flew escort above, forcing the Night King to engage her in the air or suffer losses on the ground.

The most successful ploy employed by Winterfell’s defenders is the flaming, stake-filled trench used to impede the Wight Walker’s advance. Eventually, however, Walkers sacrifice themselves to breach this obstacle.

But why wasn’t the initial line of human infantry deployed behind the trench—breaking the White Walker’s charge, and allowing the small numbers traversing the obstacle to be individually dispatched? And why didn’t Winterfell’s defenders build a dozen such trenches, each impeding the horde’s momentum and sapping its strength, while giving infantry multiple defensive points to fall back to?

The German armored juggernaut would smash through one fortified gauntlet at significant cost, only to be confronted with another line a few miles further back. Each assault cost more time and casualties to secure, bleeding away any momentum the offensive might have achieved.

Daenerys and Jon’s leadership at the battle of Winterfell is decidedly lackluster—though perhaps understandably so, given the unconventional capabilities of their adversary and their own force’s lack of experience with combined-arms warfare.

However, effective fighting forces learn from defeats and mistakes and institutes necessary reforms. Jon and Daenerys’ would do well to ensure their forces all act cohesively towards a common strategy; deploy their cavalry, infantry and artillery in a mutually-supporting manner; commit more effort to building defense-in-depth; and establish effective means to communicate between their air and ground forces.

That all sounds like quite a tall order—and it is, both for real world commanders and the heroes of a fantasy saga.

Sébastien Roblin holds a master’s degree in conflict resolution from Georgetown University and served as a university instructor for the Peace Corps in China. He has also worked in education, editing, and refugee resettlement in France and the United States. He currently writes on security and military history for War Is Boring. This article first appeared last April.