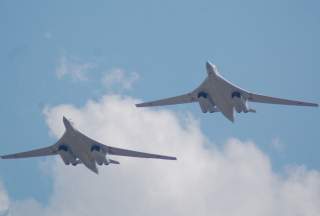 The Tu-160 currently serves as Russia’s staple strategic heavy bomber, traveling at a maximum speed of 2,220 kilometers per hour with a flight range of around 12,000 kilometers depending on payload.

Russia has flown two nuclear-capable Tu-160 strategic bombers within striking distance of Alaska, again flexing its threat projection capabilities vis-a-vis Washington on the heels of several past Tu-160 flights near US borders earlier in 2019.

The Tu-160 “White Swan” bombers covered a distance of 6,000 kilometers over the span of 8 hours before landing in Anadyr airfield in the Chukotka region, one of Russia’s easternmost airports that’s a mere 370 miles off American borders.

In an interview given to Russian state media earlier today, Russian Defense Minister Sergei Shoigu offered the reassurance that the Chukotka trip is little more than a routine exercise that was scheduled in the beginning of this year: "We are now doing what we did before. Our strategic and long-range bombers have started to conduct flights to areas where they used to fly in the past. These flights are carried out according to schedule… How is it possible to bully your neighbors using strategic bombers?" Shoigu alerted that US strategic command was notified that the flight would be taking place.

It bears noting that “bully,” which can also be translated as “tease” from the native Russian, was not Shoigu’s preferred way of framing the situation; rather, he was responding to the somewhat flippant prompt posed by the interviewer.

Nevertheless, it strains credulity that strike capability against U.S. targets was not on the training agenda for bomber exercises being held so close to US borders; as Shoigu frankly put it, “yes, we have these capabilities.” As for what precisely these “capabilities” might be, Russian defense media has some ideas. Not only would it take a Tu-160 stationed in Anadyr roughly 20 minutes including takeoff and climb to arrive in Alaskan airspace, but Russian defense outlet RG maintains that the Tu-160’s Raduga family of cruise missiles can be deployed against critical Alaskan infrastructure without ever leaving Russian airspace. RG goes on to reason that an attack along these lines could take the form of a surprise cruise missile saturation strike against key radar and missile defense systems, setting the stage for a nuclear payload delivery on US territory.

The Tu-160 currently serves as Russia’s staple strategic heavy bomber, traveling at a maximum speed of 2,220 kilometers per hour with a flight range of around 12,000 kilometers depending on payload. The Soviet-era Tu-160 is slated to be phased out with the imminent arrival of its Tu-160M2 successor, a modernization package including a new avionics suite, handling improvements, and an upgraded version of the Tu-160’s Kuznetsov NK-32 afterburning turbofan. The Tu-160M2 is not expected to boast any significant degree of stealth capability because the Tu-160, as the world’s largest operational bomber, was never meant to penetrate deep into enemy airspace; that duty instead falls on Russia’s upcoming, stealth-specialized PAK-DA fighter. As aptly illustrated by these latest training exercises, the Tu-160 occupies the niche, but crucial role of a long-range standoff cruise missile delivery platform.

Since the Crimean annexation of 2014 and ensuing deterioration in Russia-NATO relations, the Tu-160 has quickly risen to become one of the most prolific tools in the Kremlin’s nuclear signaling arsenal. Earlier this year, North American Aerospace Defense Command (NORAD) scrambled a US-Canadian fighter group to intercept two Tu-160’s flying close to Canadian airspace. Before that, Moscow stationed a pair of Tu-160’s in Venezuela amid a sharp downturn in relations between Washington and Caracas.