Why Did the U.S. Air Force Send B1 Bombers to Russia’s Doorstep? 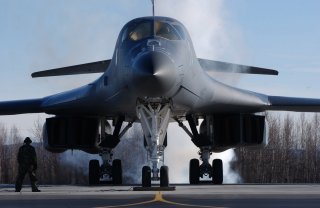 Earlier this month, a pair of Air Force B-1B Lancers flew from Anderson Air Force Base in Guam to Alaska and back. In Alaska, the two bombers conducted a “large force employment exercise” in the Joint Pacific Alaska Range Complex. The crews then flew southwest to Japan where they “completed familiarization training in support of U.S. European Command objectives,” according to a U.S. Air Force press release. Then, the two B-1Bs “continued south in the vicinity of Misawa, Japan integrating with the USS Ronald Reagan and a P-8 Poseidon to conduct Long Range Anti-Ship Missile training before returning to Guam.”

Though their mission sounds pretty benign, what isn’t mentioned in the Air Force press release was the route the two bombers took on their way to Guam. According to online air traffic monitors, the two B1s flew through the Sea of Okhotsk, a marginal sea on Russia’s southeast border near Japan.

In order to access the Sea of Okhotsk, the B1 bombers had to fly above the disputed Kuril Islands. The westernmost islands in the Kuril chain were annexed by the Soviet Union at the tail end of World War II. The bomber’s route likely brought them a mere twenty or so kilometers from the Russian-administered islands—a strong challenge, similar to American freedom of navigation missions in the South China Sea.

Though B1s have made headlines as an effective close air support platform in Afghanistan, they were originally designed to be America’s supersonic nuclear-capable bomber.

Commenting for the press release, an Air Force official said that the bomber’s mission was used to “demonstrate our ability to hold any target at risk, anytime, and anywhere,” and detailed that “the training value of these sorties is irreplaceable…our team conducted large force exercise training around Alaska with U.S. Air Force fighters, we conducted multiple standoff weapons training events, as well as integrated with U.S. naval assets along the way. From a readiness perspective, it is hard to think of a more valuable training sortie.”

The strike-anywhere capability is especially potent from Guam, located in the western Pacific Ocean. Guam is the westernmost American-administered territory, and as such is the closest location to the South China Sea—and China.

As the United States shifts from ground wars in the Middle East to confronting near-peer rivals China and Russia, the focus has shifted from a physical troop presence, to deterrence in the air and at sea. A big part of American deterrence in the western Pacific will be the B1’s Long-Range Anti-Ship Missile. According to a top Air Force General, the missile is “perfectly suited” to the Pacific region, thanks to its stand-off capability which protects bombers from enemy anti-air missiles.

An Air Force lieutenant colonel succinctly explained what the B1’s flight represented, saying “this shows the ability of the United States to reach anywhere on the globe and synchronize operations with other Geographic Combatant Commands.” Enemies beware.