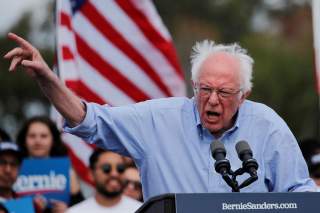 Up until this past week, there seemed to be a bipartisan consensus that most of the Democratic debates had been pretty boring. “It was like watching death,” Donald Trump said of one. That all went out the window Wednesday night, February 19.

Trump, on Twitter, crowned himself the winner of the debate, and Fox News host Bret Bair agreed. Anyone who thinks fiery debates and feuds between the candidates are going to divide the Democratic Party and cost them the election only need think back four years to Marco Rubio calling Trump a small-handed conman, Rick Perry calling him a demagogue, and Lindsey Graham calling him a “race-baiting, xenophobic, religious bigot.” They are singing very different songs now.

One line of argument is to compare the debates to our mythicized images of epic old fashioned debates. John Podhoretz wrote in the New York Post: “Forget Lincoln and Douglas. Forget Nixon and Kennedy. Hell, forget the Athenians and the Melians back during the Peloponnesian War.”

Well, the Lincoln-Douglas debates featured just two candidates giving hour-long speeches back-to-back. That might be judged as “boring” today. And, seriously, hosting formal debates between professional politicians would not contribute to the public’s knowledge of the issues. That would just be giving craven liars thirteen minutes to lie uninterrupted and ramble on unrelated tangents. (For that matter, the Nixon-Kennedy debate is commonly remembered for what it said about the importance of appearance.)

Furthermore, Bloomberg’s performance was assessed as “disastrous.” Podhoretz was not alone in that judgment. The Post, in a separate article, wrote that Mayor Mike “implode[d] onstage,” while Sanders’ “socialist” image has been judged as unelectable for quite some time.

Gee, an avowed billionaire gets attacked for making sexist comments and stumbles through a debate with “painfully clueless” responses. He’ll never be president.

The Democrats, such as Sen. Warren, comparing Bloomberg to Trump might be making a mistake. After all, the most salient fact about Trump as it relates to the Democratic primary and the upcoming election is this: Trump won.

There were many reasons for Trump’s victory, which were beaten to death and should have been buried six feet under long ago, but key for my argument is Trump’s very real skills at combative campaigning, trolling, and creating a following. Bloomberg is attempting to troll Trump, taking the fight directly at him on Twitter and on the airwaves.

Whatever you think of a CEO who tweets images of himself eating taco bowls on Cinco de Mayo (and I’m gonna say it’s tacky), a lot of people think Trump is “authentic.” At the end of the day, that, more than anything, decided the election (and decides more elections than proponents of Lincoln-Douglas debates would like to admit). That’s why Bloomberg and Sanders have the two best shots at knocking off Trump, perhaps with Biden close behind.

Trump was seen as an ordinary guy who cared about the plight of distressed workers. That’s why, when he said something like, Iowans are stupid for preferring Ted Cruz to him, it didn’t hurt him too much. He could get away with what others couldn’t.

Now, I do not know if soda cop Mike can develop the image as a down-to-earth fun-loving guy, but his Democratic rivals and the critical press are certainly trying to help him there. Liz started the debate by pointing out how he has a record of indulging in “locker room talk.” The media unearthed a supply of quotes, including this: twenty-four years ago, Bloomberg pointed out that he enjoyed “theatre, dining and chasing women,” and had a nice life being young and very, very rich in New York City, not exactly a controversial statement. If such yawn-inducing “gaffes” are sold as campaign-killers, that might only show that it is unusual to have a person with blood flowing through his veins enter politics.

The analysis that Bloomberg’s campaign died would probably be true if the same had happened to any other ordinary candidate. But we were treated to reports of the Trump campaign’s death too many times before. Both of them live by different sets of rules than do politicians. The attacks against Bloomberg—that he used to be a Republican, that he supported stop ’n frisk, that he said offensive and/or non-PC things—were largely known by his voters when he got into the race. Maybe it’ll hurt him to have it all pointed out on stage, but I have a suspicion it might not.

His case for the race is convincing, if you believe that Trump is as grave a problem as he is said to be and if you believe Bloomberg is as electable as he and his paid Instagram fans say he is. Like he said to Bernie, defeating Trump is too important to gamble on a socialist.

On the other side, Bernie makes a convincing case from a different set of premises. Bernie would phrase it like this: People are fed up with income inequality continuing to rise year after year and Washington doing nothing but cutting corporate taxes deeper. They are fed up with moderate “neo-liberal” (Bernie’s word) politicians backed by corporate money compromising on everything. Or, as he said at the New Hampshire debate, “The way you bring people together is by presenting an agenda that works for the working people of this country, not for the billionaire class.”

If you allow me to rework his argument slightly, I would downplay the actual contents of the agenda. Donald Trump, for example, did not present an agenda, period. And the agenda he did pursue upon taking office did not work for the working people. It was just an ordinary establishment Republican agenda on all but a few issues. But he did present a rhetorical agenda and a hodgepodge of cultural grievances that work for the white working-class people of this country.

Bernie’s agenda, for that matter, is also less developed than the Harvard professor wonk also vying for progressive support. Warren’s attempt to come up with a plan for funding her single-payer healthcare scheme did her in, while Sanders could just answer vaguely about taxes going up and premiums going down. He rightly recognizes that the details are not important at the campaign stage. And his appeal to anti-PC cultural and media figures like Joe Rogan shows he can play on cultural battlefields, too.

If there’s anything everyone agrees on about Sanders, it’s that he’s straightforward and direct. “At least he’s honest.” That’s why people like Trump, on audio recorded by Lev Parnas, and Tucker Carlson, on TV, say they fear Sanders.

While Bloomberg and Sanders come to their conclusions from different angles, ultimately they both arrive at the same point. They are both, in different ways, authentic. These are strange times we’re living in, and it may be that the Democrats need an unusual candidate to beat an unusual president.