Don't Listen to the 'Michael Bloomberg Lost the Debate' Hype 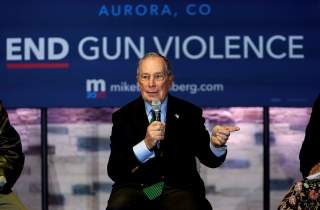 The conventional wisdom will likely be that former New York Mayor Michael Bloomberg was the loser in Wednesday night’s Democratic debate, but that wisdom is wrong.

Yes, after an initial pile-on by everyone else on stage, a battered Bloomberg was mostly a non-entity during the first hour of the debate, especially amid prolonged pandering about a Las Vegas culinary union that was irrelevant to the viewing audience. He was an observer for much of the time, wasn’t sure whether to play defense or offense against MeToo smears, and seemed adrift in his answer about healthcare.

But there was a turning point. At first, Bloomberg was cut off when he said, somewhat meekly, “As the only one here who has started a business…” Then he made the point again and again with confidence, and even uttered a known heresy in progressive circles by defending capitalism and saying socialism and communism didn’t work. (Bernie Sanders called this inconvenient truth a “cheap shot.”)

Bloomberg also gave answers progressives will like about climate change alarmism, which is a hoax, but basically has become a pagan religion for the secular left, and its chief justification for government control of the economy. The former mayor reminded people that he has devoted considerable personal funds to closing coal-fired power plants, which might even rival the NRA among progressives’ top bugaboos. However, his defense of China, where his Wall Street friends have made their fortunes, was an unforced error.

Overall, Bloomberg didn’t deliver a dazzling performance, but he didn’t need to. In his first debate, Bloomberg simply had to do well enough to continue the panic move within establishment Democrat ranks to make him and his beautiful fortune the alternative to socialist Sanders. Bloomberg achieved this. In using fewer over-polished talking points and offering candid responses on controversial but effective police tactics like “stop-and-frisk,” he seemed candid and even human.

The same cannot be said about one of the other reputed moderates on stage, Pete Buttigieg. The former small-town mayor reminds one of the annoying kid in class who always raises his hand and compliments the teacher. Buttigieg comes across as smart, but not likable. He is somewhat like Bill Clinton, but too young, and without the humanizing flaws and vices that voters like to see.

Amy Klobuchar devastated Buttigieg with a jab that he “memorized a bunch of talking points,” while pointing out that she had actually been in the arena. Klobuchar might be the most likable person on stage, and delivered a solid performance. Echoing Bloomberg, she said, “I believe in capitalism.” That won’t go over well with Twitter, but may with many primary voters in libertarian-leaning Nevada. She remains an important factor in an unsettled race.

While Klobuchar brimmed with energy, Elizabeth Warren delivered unflinching rage. Even apart from her radical policies that might work on campus but not in the real world, Warren is without a doubt the least likeable and least electable person on stage. Her fanaticism is so intense that she cannot bring herself to end her futile campaign, even though doing so would help fellow-progressive Sanders.

Joe Biden continued to evaporate from the campaign. Everything he said was delivered loudly and aggressively, but nothing was memorable.

Aesthetically, the debate was a mixed bag. Buttigieg’s five o’clock shadow was weird and distracting. It couldn’t have been unplanned given his fastidiousness. Both Biden and Bernie had noticeable dandruff. Whoever did Biden’s makeup was presumably an infiltration agent sent by the RNC. Klobuchar’s bob haircut doesn’t work for someone who moves her upper body rapidly. Yes, these are catty points, but TV is a visual medium, and so is national politics. As a Mel Brooks character once said, “Everything is showbiz.”

The net result of the evening is that the race remains unsettled, but is drifting toward a choice between leftwing ideologue Sanders and establishment globalist Bloomberg. The debate did have the air of being in a parallel universe in which our country is in the depths of an economic depression, and in which we victimize the sick and poor for fun. Of course, none of that is true, which makes one wonder if this whole Democrat contest is a big argument over who gets to lose to Donald Trump in November.