Why Holding Returned ISIS Members Accountable Just Got Even Harder 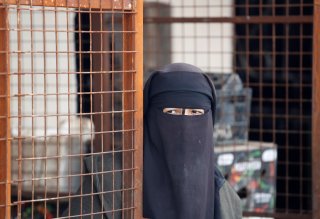 A former soldier in the Irish Defence Forces has been cleared of the charge of funding the Islamic State (ISIS) despite being found guilty of being a member of the terrorist group. This raises a concern: if membership in the Islamic State is not sufficient evidence of financial intent, then what more is required to find individuals guilty of supporting terrorist groups that aim to establish a caliphate.

Irish national Lisa Smith converted to Islam in 2011 and in 2015 traveled to ISIS-controlled territory in Syria. Smith’s journey to Syria, or hijra, as ISIS refers to it, followed the call made by ISIS leader Abu-Bakr al-Baghdadi. During her time in Syria, Smith married a Briton, Sajid Aslam, and gave birth to a daughter in June 2017. However, as the collapse of the Islamic State became a reality, the Irish convert made the decision to pack her bags and return to Ireland with her daughter in December 2019. She was arrested at Dublin Airport and charged with terrorism offenses.

Smith pleaded not guilty to two charges: being a member of ISIS between 2015 and 2019, and financing terrorism. At the Special Criminal Court in Dublin, the prosecution alleged Smith had “endeavoured to access ISIS-controlled territory and sought out the means by which this could be done.” She had “enveloped herself in the standard of the black flag of Islamic State,” the prosecution noted.

Furthermore, the prosecution made the case that in this specific context, making hijra to ISIS-controlled regions was a “central act of allegiance to this proto-state” that the terrorist group also relied on for its survival.

Smith’s defense argued there was no evidence of her membership in the group and that her case is unique and unprecedented. Furthermore, the defense pointed out that it was not enough to say she had traveled there and had been “subsumed” into the organization. Drawing on case law, the defense believed it was unknown in Irish law for an individual to commit an offense without being aware they were committing it.

The judge, Justice Hunt, disagreed with this assessment and said there was no room for naivety or ignorance by the time Smith traveled to Syria. Her eyes were wide open, he said. On this basis, Hunt concluded that on the first charge of membership of a terrorist organization, Smith was in fact guilty. However, on the second charge of attempting to finance the terrorist organization, Smith was found not guilty.

This ruling raises a concerning question: if membership in a terrorist organization, for which Smith was found guilty, is not enough to prove financial intent, what can governments and the prosecution reasonably do to prevent this from happening again?

It is important to note that Hunt said there was no room for naivety or ignorance regarding Smith’s hijra to ISIS-controlled Syria. Hunt’s assessment was correct, but he falls short in his second judgment by not applying this same standard to the charge of financing members of a terrorist organization.

Quite rightly, when an individual is part of a terrorist organization that controls vast swathes of territory, the idea that that donated money will be used for any purpose other than the benefit of the organization is absurd. During ISIS’ reign of terror, the organization was responsible for mass murder, torture, money laundering, and rape. That the judge appears to ignore this when money is being sent to members of the organization may show his own naivety and ignorance.

More importantly, it appears the courts are unaware of the nature of terrorist organizations like ISIS. Membership in Islamist terrorist organizations is achieved by swearing allegiance (bayah) to the leader and the cause. It is not a full-time job where someone works nine-to-five and has the weekends off; it is an act of faith—particularly when it comes to organizations such as the Islamic State. Therefore, to send money to a member of it can only mean sending money for the benefit of the organization and not for charitable or humanitarian aid—which is demonstrably at odds with ISIS’ track record.

When one joins a terrorist organization, they subscribe to their vision, mission, values, and goals—there is no additional socialization needed to accept these if you’ve already agreed to join. The socialization occurs during the process of radicalization and indoctrination to get to the point of membership, not after. Therefore, it is surprising that such a contradictory judgment was reached on the two charges.

The case of Islamic State member Lisa Smith raises a number of concerns for the judiciary to consider during prosecution. Namely, that membership of a terrorist organization must mean all activities related to the organization are unlawful. There should be no room for ambiguity. In addition, members do not sign up for the organization for a short period of time; they embody it throughout their duration as a member. Ignoring this approach could lead to judgments that let members of terrorist organizations off the hook.

Wasiq Wasiq is a journalist specializing in defense and terrorism. You can follow him on Twitter:  @WasiqUK.