Why Marine Corps Reconnaissance Will Never Be the Same Again 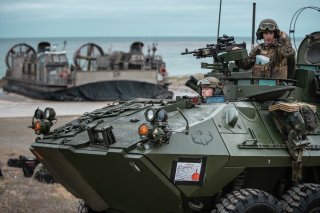 The backbone of the Marine Corps’ reconnaissance, the Light Armored Reconnaissance vehicle, is not a modern vehicle. Introduced into Marine Corps service in the early 1980s, the platform sports a 25mm chain gun and is amphibious.

Speaking to reporters last week, Marine Lt. Gen. Karsten Heckl, the deputy commandant for combat development and integration, explained that the Light Armored Reconnaissance “in the Indo-Pacific with III [Marine Expeditionary Unit] is most likely going to look different than light armored reconnaissance in II MEF.”

“Our light armored reconnaissance (LAR) battalions must transition from their current ground vehicle-centric approach to an all-domain mobile reconnaissance approach. Sole reliance on armored ground vehicles for reconnaissance is too limiting, especially in complex littoral environments,” the Marine Corps’ latest Force Design update read. It was released earlier this month.

“Attributes such as reconnaissance, surveillance, targeting beyond the line of sight, littoral mobility, and equipment that integrates with special operations and joint forces are needed,” it continued. Still, the LAV is too slow in the water and under-armored to survive in the Indo-Pacific against a determined enemy and could struggle to survive against Chinese anti-ship missiles. Cognizant of that threat, the Marine Corps is experimenting and may decide to go in the unmanned direction.

“We are doing some demos and prototyping right now so we can get ahead and maintain decision space for the commandant as we flesh out what that recon capability’s going to be in the future,” Marine Colonel David Walsh, the acting program executive officer for land systems, explained. “We’ve now got a head start on if there’s a vehicle that needs to be fielded and bought to support that vision, we’ve now got a couple years head start. We’ve done some competitive prototyping and that vehicle won’t be 5 years out. It’ll be a couple years out from being fielded,” he continued.

The Marine Corps’ Force Design 2030 document envisions a radically redesigned Corps, optimized for fighting a littoral war against a peer enemy in the Indo-Pacific. Tailor-made for that mission, the Marine Corps has divested a great deal of equipment that would not survive in that environment. They’ve divested all their tank battalions, as well as much of their artillery and mortar battalions, in order to invest in new equipment like the Amphibious Combat Vehicle, an 8x8 wheeled carrier.

“What do our organizations already recognize? They recognize that in terms of where the commandant has pointed us, then our focus is on how we operate in and affect battlespace that includes more than land,” Marine Major General Ben Watson, the commanding general of the Marine Corps Warfighting Lab, said. “So if we’re going to own a battlespace that includes water space, but we can only operate in wheeled vehicles and by walking around, then we are probably incapable of controlling that battlespace and maximizing our influence within it. So we’ve got to diversify the means with which we get ground,” he further stated.

Though the Marine Corps is still experimenting with what precisely the future of armored reconnaissance will look like, but there are strong indications that it will be much more amphibiously capable, and potentially unmanned.