Why the Navy Hates Its 21 Littoral Combat Ships 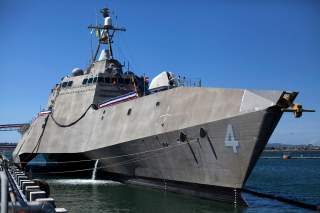 Key point: The LCS is a terrible ship that no one knows what to do with.

The U.S. Navy is close to receiving its 21st Littoral Combat Ship. Now the sailing branch needs to figure out exactly what to do with the long-delayed, much-maligned warships.

The recent addition of ship-killing Naval Strike Missiles on newer LCSs somewhat mitigates the dearth of weaponry, but the LCSs still will be alone among American surface combatants in not having vertical-launch cells for anti-air and cruise missiles.

The Pentagon’s disappointment with the ships contributed to the 2014 decision to halt acquisition of the type at just 35 out of the planned 53 ships, with savings going toward a new program to build a conventional missile frigate.

But those 35 LCSs eventually could account for more than 10 percent of the Navy’s battle force. The sailing branch must figure out some way to make use of the speedy vessels.

Bryan Clark, an analyst at the Center for Strategic and Budgetary Assessments in Washington, D.C., told Defense News reporter David Larter the LCSs despite their lack of endurance and heavy weaponry might work well as motherships for flotillas of robotic ships. The Navy has begun the budgeting and testing processes to acquire potentially scores of missile-armed unmanned corvettes.

“I think the Navy needs to mitigate those limitations by shifting the use of the LCS to much more of a command-and-control node and an unmanned vehicle support node,” Clark said.

“For example, the [Independence-class] LCS-2 could be very useful as the host for unmanned surface vessels or unmanned underwater vessels or unmanned aerial vehicles,” he added. “And then it could support the larger UUVs and USVs by having them come alongside and use the ship to provide support, repair and fuel to the unmanned vehicles.”

“Because then you can take advantage of the range of the unmanned vehicle to go do missions, and the LCS doesn’t have to drive around, burn up fuel or risk getting stranded somewhere because of a propulsion problem.”

The Navy also has considered equipping its new missile frigates as drone-controllers.

Jerry Hendrix, an analyst with The Telemus Group in Virginia, told Larter the LCSs should focus on mine warfare. The Navy is preparing to decommission its 13 Avenger-class minehunters. Deployable teams of divers and robots have begun to pick up the slack in mine warfare, but the fleet still needs ships specifically for hunting mines.

A kit with mine-hunting robots is one of the three LCS modules. “I still need those mission modules,” Hendrix said. “Especially the mine-countermeasures mission modules with the Avenger-class minesweepers going away.”

Even as the LCSs potentially find niches controlling robots and hunting mines, they still might not be able to contribute to the main fleet operations, which tend to revolve around aircraft carrier battle groups and missile-armed surface action groups.

Both types of groups can strike at long range thanks to their warplanes and SM-6 and Tomahawk missiles. But the LCS doesn’t carry planes and can’t launch big missiles. And its poor fuel-efficiency could be a drag on a group.