Why No One Wins a War over the South China Sea 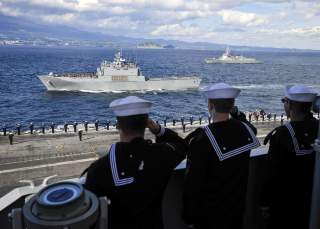 A recent near-collision between Chinese and U.S. Navy destroyers has focused new attention on the potential for conflict in the South China Sea and led to the cancellation of a visit to China by Defense Secretary Jim Mattis.

China’s naval expansion in the South China Sea puts it in a position to control sea lanes used transport trillions of dollars worth of goods per year, accounting for up to a third of world merchandise trade. China has militarized islands and claimed most of the Sea as its own territorial waters, on the basis of flimsy historical claims and routinely denounced U.S. naval operations in the region as illegal provocations.

Unsurprisingly, the response to Chinese assertiveness from much of the foreign policy community has been to demand a similarly assertive response from the United States. For example, Robert Kagan has argued that the United States must resist the extension of a Chinese sphere of influence in its immediate vicinity.

A realist perspective suggests a more cautious approach, and a more careful analysis of the economic issues. A rational assessment suggests that China has far more at stake in this issue than the United States.

The crucial, but commonly neglected, fact about trade flowing through the South China Sea is that the great majority of this trade flows to and from China. That makes control of the South China Sea a crucial national interest for China, since a hostile power could potentially choke off most imports and exports. But obviously, China has no interest in disrupting its own trade. By contrast, the only direct interest of the United States is in the abstract principle of freedom of naval operations.

Moreover, while the U.S. military is far more powerful in global terms, the balance of forces is much more even in regional terms. Conflict between powers of comparable strength will generally be resolved in favor of the side with the greater commitment.

The South China Sea is also important to U.S. allies including Japan and Korea, as it is part of the cheapest route for importing oil and other resources. It is not, however, the only route. It has been estimated that diverting imports might cost $600 million a year for Japan, and $270 million a year for South Korea.

That’s a lot of money. But compared to the potential cost of the Trump administration’s trade policy, it’s trivial. The United States imports $40 billion in cars from Japan and $10 billion from Korea. The 25 percent tariff now under consideration, would cost Japan $10 billion a year and Korea $2.5 billion.

So, we are in the strange position where the United States is deploying massive naval forces to deter a purely hypothetical threat to its Asian partners and allies, while making actual threats to impose much greater economic damage on those some partners and allies.

Similar points may be made about the Trump’s administration withdrawal from the proposed Trans-Pacific Partnership. From the viewpoint of the Obama administration, which pushed the deal, the central geopolitical rationale was to set up an economic structure that marginalized China. Trump’s decision to pull out would have made sense as part of a rapprochement with China. However, the administration’s trade policy has effectively put allies and rivals in the same camp.

A rational policy would dial down threats on both the trade war and naval rivalry and focus on issues of common interest to everyone in the region, most obviously the threat posed by North Korea’s nuclear arsenal. Even without the added complications created by the Trump administration, such a policy seems a long way off.

The gradual expansion of Chinese power in the South China Sea has caused great alarm. However, it should be less alarming than the looming prospect of a trade war, in which the United States will be fighting alone.

John Quiggin is the Hinkley Visiting Professor at Johns Hopkins University and an Australian Research Council Federation fellow at the University of Queensland. He is author of Zombie Economics: How Dead Ideas Still Walk Among Us.