Why the Palestinian Authority’s Strategy for Biden Is Backfiring 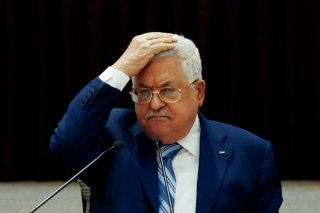 “Fate,” Winston Churchill once observed, “holds terrible forfeits for those who gamble on certainties.” By choosing to hold national elections for the first time in more than a decade, the Palestinian Authority (PA) has tossed the dice. But the PA’s decision—part of a revamped strategy to appeal to the new administration in Washington—is already backfiring.

On Jan. 15, 2021, PA President Mahmoud Abbas announced that the authority would conduct parliamentary and presidential elections. The former would take place in May and the latter in July. The PA, which rules over the majority of Palestinians, hasn’t held elections in fifteen years.

The last time that the authority held elections they ended in disaster. Hamas, the U.S.-designated terrorist group that calls for Israel’s destruction, won parliamentary elections held in January 2006. Fatah, the movement which dominates the PA and is controlled by Abbas, refused to recognize the results, sparking a brief and bloody civil war that resulted in Hamas taking power in the Gaza Strip. The years since have witnessed multiple “mini-wars” between Hamas and Israel, prompted by indiscriminate rocket fire and kidnappings by the terrorist organization.

The election and its aftermath also resulted in a fracturing of the Palestinian national movement, with the West Bank being run by the Fatah-controlled PA and Gaza being dominated by Hamas.

While bitter rivals, the supposedly secular Fatah and the Islamist Hamas have much in common. Both have refused, either implicitly or explicitly, to recognize the Jewish state of Israel and both have supported, in one fashion or the other, terrorist attacks. Both have established repressive police states in which dissent results in jail time—or worse.

Indeed, after the elections and subsequent civil war, Abbas dissolved the government and declared a state of emergency, blaming Hamas for formulating “a plan to split Gaza from the West Bank and to establish an emirate, or a mini-state of extremists and religious fanatics.”

But the 2006 debacle was, in large measure, Abbas’s fault. As his biographers Amir Tibon and Grant Rumley observed, Abbas failed to appreciate that “Fatah was completely fractured at the local level…while Hamas’s candidates ran under one banner, Fatah showed disastrous disunity by having splinter lists in multiple camps, towns and villages.” This, and Fatah’s infamous reputation for corruption, begat its loss. Additionally, Israel’s 2005 unilateral disengagement from Gaza “had strengthened Hamas’s narrative that their path of violent ‘resistance’ produced more tangible results than Fatah’s pro-negotiations track.”

Several Israeli officials had warned their U.S. counterparts that Hamas shouldn’t have been allowed to participate in the elections, noting that the Oslo Interim Agreement prohibited the political involvement of groups who “advocate racism” and “pursue the implementation of their aims by unlawful or non-democratic means.” And, with concerns about a strong Hamas showing, a few voices suggested postponing elections.

But as Elliot Abrams, then-serving as the U.S. deputy national security adviser for the Middle East, recounted in his 2013 book, Tested by Zion, some U.S. officials pushed back, arguing that forbidding Hamas’s participation would “prove that all the fine [U.S.] words” about supporting democracy in the Middle East “were phony.” And Fatah itself had argued that excluding Hamas would actually delegitimize the electoral victory that they were sure was theirs.

The ensuing years have seen not only multiple wars between Israel and Hamas, but a more authoritarian and recalcitrant Abbas. Increasingly autocratic, the eighty-five-year-old reacted to the loss by imprisoning and even reportedly torturing political opponents and critics. Fatah’s legislative council has not met in more than a decade and Abbas has exiled potential rivals, like Mohammed Dahlan.

And history seems to be repeating itself.

The PA’s announcement that it would hold elections was “almost certainly” triggered by the victory of Joe Biden and Abbas “being desperate to find his way into the new White House’s good graces,” as Omar Rahman, an analyst for the Brookings Institute observed. The Trump years saw a deterioration in relations, prompted in part by the United States implementing the 1995 Jerusalem Embassy Act and cutting aid to the United Nations Relief and Works Agency (UNRWA), an organization that claims to help Palestinian refugees, but whose employees have been caught praising Adolf Hitler and encouraging anti-Jewish violence.

The Trump administration also sharply criticized Fatah’s leadership and the PA’s refusal to participate in bilateral negotiations with Israel. In response, the PA recalled its U.S. envoy in December 2017. Abbas later refused to take phone calls from then-U.S. Secretary of State Mike Pompeo and, not for the first time, threatened to tear up security agreements with both Israel and the United States.

But the PA’s new strategy is already collapsing.

As the journalist Khaled Abu Toameh has documented, Abbas has been engaged in a massive crackdown ahead of elections. On April 19, 2021, for example, Fadi Elsalameen, a Palestinian-American commentator and Abbas critic, told the Jerusalem Post that Fatah’s al-Aqsa Martyrs Brigades had sent him death threats. In February, the PA reportedly detained and assaulted Mahmoud Ka’bi, a supporter of Fatah’s Marwan Barghouti, another Abbas rival. Some West Bank supporters of Hamas have also reportedly been tortured.

These abuses have been underreported by Western press outlets and many self-styled human rights groups, despite recent revelations that PA intelligence operatives were spying on “journalists, human rights activists and political opponents,” as AFP noted in an April 22 report.

Yet, the PA’s measures seem to be for naught. It looks increasingly likely that if elections are held, the forces of the unpopular Abbas will lose. Rivals like Dahlan and Hamas have warned the PA president not to get cold feet and cancel the elections. In an effort to extricate himself from a situation of his own making, Abbas has turned to a favorite tactic: blaming Israel.

The PA has said that it might delay or cancel the May 22 election if Israel doesn’t allow ballot boxes for voting in east Jerusalem. But as the journalist Lahav Harkov noted, it was “the Palestinian Authority, not Israel, [which] prevented Jerusalemites from voting absentee. That is something that they could have done without involving Israel at all.”

Whether the elections take place or not, it seems certain that Abbas’s gamble has already failed. And once again, the blame will largely reside with him.