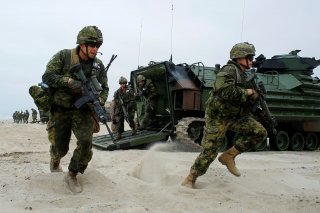 RIMPAC is a long-standing military exercise that happens every two years. This year, it includes ten countries, twenty-two ships, one submarine, multiple aircraft and more than 5,000 personnel, according to a Navy announcement.

The event, which includes forces from Australia, Brunei, Canada, France, Japan, Korea, New Zealand, the Philippines, Singapore and the United States, is known for exploring joint attack operations and the level of coordination needed to conduct integrated surface warfare missions.

“While we may be able to surge ships and people, we cannot surge trust,” Vice Admiral Scott D. Conn, RIMPAC Commander and Commander of the 3rd Fleet said in a Navy statement.

The Biennial event, scaled back this year due to cornavirus restrictions, will take place near the Hawaiian islands.

RIMPAC takes on additional significance in light of current tensions in the Pacific between the United States and China, given that both countries have been substantially increasing their patrols, training exercises, combat demonstrations and surveillance operations. Some of those exercises could easily be seen as highly provocative, such as China’s flying of fighter jets and surveillance planes over the Taiwanese coast.

The real value of an exercise like RIMPAC, it would seem, relies upon networking and sensor integration. For instance, having allied Navies operating in tandem brings a unique and substantial combat advantage, provided the countries can securely communicate with one another.

Moreover, successful data-sharing between countries expands the size of the attack force, enabling more distributed operations. The effectiveness of this kind of interoperability, however, hinges upon the extent to which countries’ respective technologies can function on common standards.

Should the technical infrastructure, radar frequencies, fire control systems or even electro-optical sensors be radically different between countries, there may be challenges when it comes to connecting. In many cases, there will need to be common standards or protocols able to expedite secure information sharing.

Of even greater significance, the communications technologies need to be hardened against jamming, hacking or other kinds of enemy interference.

Should radar systems on board an Australian destroyer, for instance, be able to find an approaching ballistic missile heading toward U.S. surface ships, perhaps data could be relayed between surface ships or aircraft, giving U.S. ship commanders more time with which to respond, defend or counterattack.