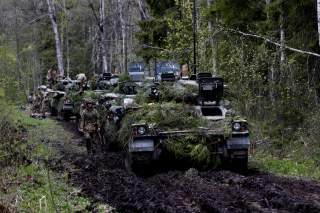 Key point: The former Soviet states in the Baltic are standing up to Russian aggression. And NATO has their back.

On May 2, 2018, Estonia began the largest exercise in its history since regaining independence in 1991. The exercise is called Siil 2018 (“hedgehog” in Estonian), will last until May 14, and features 15,000 servicemen including 2,000 foreigners from ten NATO countries (Belgium, Canada, Denmark, France, Germany, Latvia, Lithuania, Poland, the United Kingdom and the United States) and five non-NATO countries (Finland, Georgia, Ireland, Sweden and Ukraine).

The northernmost of the Baltic States, Estonia has been under pressure to increase its defense spending since the 2014 crisis in Ukraine, owing to its proximity and tumultuous history with Russia. Tallinn has increased the country’s defense spending to record levels, meeting NATO’s 2 percent requirement and making little Estonia one of only six alliance members to reach that goal. Estonia has increased the readiness of its reserves with regular exercises, a task other NATO members on the eastern flank are only starting to tackle. On March 1, 2018, Estonia’s Chief of Staff, Brig. Gen. Martin Herem declared that Estonia can “can’t be occupied within days,” throwing the gauntlet down for any hypothetical Russian aggression.

Understandably, the Russian press has taken interest in Siil 2018, running the headline “largest military exercise” frequently. For a country of fewer than 1.5 million people, these statistics and headlines are indeed impressive. Some Russian commentators have discussed the possibility that the Baltic States are preparing their own aggression against Russia, either literally or by simply conducting these exercises in regions with Russian-speaking populations.

However, how does a 15,000-strong exercise stack up against Russian military exercises? It should be noted that most of the 13,000 Estonians participating in Siil 2018 come from the Estonian reserves (Kaitseliit). Russia, by contrast, has a rather dysfunctional reservist recall system only just beginning to rectify its problems. Even Belarus has a better reservist training and reintegration system than Russia.

However, Russia today retains a juggernaut of a regular force with a variety of supporting services technically not considered part of the “armed forces.” One of those services, the Ministry of Emergency Situations, hosted a massive 112,000-man exercise across Russia just two weeks ago. Including the ancillary government personnel involved, its total number of participant was greater than 640,000. However, this was an exercise designed to respond to large-scale natural disasters like floods and wildfires, not military operations (though these forces would certainly be providing support to Russian infrastructure and stricken population centers during a war).

In September 2017, Russia famously promised there were only 12,700 participants in Zapad-2017. Laying aside assessments of why that claim was dubious, this would suggest Russia does not regularly perform exercises of the magnitude of Siil 2018. However, suggesting that would be an act of Russian information warfare: Moscow conducted a 19,000-man exercise in the Far East in January 2018.

Furthermore, Russia has a tendency of breaking up larger military operational exercises into smaller pieces, such as conducting an amphibious exercise over an unnecessarily long period of time, practicing only individual pieces of the operation. Adding together all activities in Russia just from April 23–27, 17,389 servicemen were exercised. Russia is a large country, but exercises including 1,000 or more participants took place in five events.

Looking closer to Estonia, more than 20,000 Russians were documented by the Russian Ministry of Defense to have participated in March 2018 in the three regions adjacent to the Baltic States (Kaliningrad, Pskov and Leningrad Oblasts). My analysis suggests that March 2018 was a special time for training in the Western Military District, but not sufficiently so to merit a general name for the larger collection of exercises.

This is a spot assessment of three random events in Russia since the start of 2018 is hardly comprehensive, only hinting at the capabilities Russia regularly displays with its armed capabilities in what the Foreign Minister of Lithuania calls “military hooliganism.” Other incidents, such as the firing of shipborne missiles over the Latvian exclusive economic zone (EEZ) even as the leaders of the Baltic States visited the White House at the beginning of April 2018, are so numerous as to be trivia.

Estonia’s large-scale Siil 2018 exercise is not trivial. It is the largest exercise in independent Estonian history. However, were the exact same exercise taking place inside Russia, no one would notice it as it would blend in with all the other military activities ongoing there discreetly. Except for the fact that the existence of fifteen other nations willing to say they would defend Russia truly would be newsworthy.

Nicholas J. Myers is a Russian and Belarusian military analyst at War Vs Peace. You can follow him @WarVsPeaceOrg or see his research at warvspeace.org.​ This article first appeared last year.