Why Russia Won't Go Bankrupt Paying for Its Military Buildup 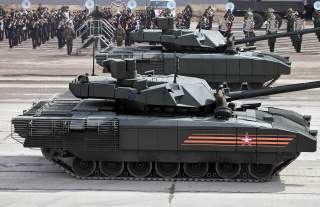 One reason the Soviet Union collapsed was that Moscow went broke trying to keep up with the United States in the Cold War arms race.

Not likely. "On a most basic level, by 2027 the Russian armed forces should be considerably better equipped than they are today," according to a new study by British thinktank Chatham House, which suggests that Moscow has devised a sustainable defense buildup.

The study examined GPV 2027, a decade-long weapons procurement program that  will run until 2027. It is a successor to the current GPV 2020 program, which concludes two years from now.

GPV 2027 will cost 19 billion rubles, or about US$300 billion, a not inconsiderable sum for a nation that ranks below Canada in GDP (the U.S. defense budget in 2017 alone was $524 billion). But it is affordable.

"Even if the Russian economy grows at a modest annual average rate of only 2 per cent over the next decade, and even if the burden of defense spending is reduced to the historic post-Soviet average of 4 per cent of GDP, the authorities should at least come close to allocating the R19 trillion earmarked for GPV 2027," Chatham House concluded.

GPV 2020 had some success in upgrading Soviet-era weapons, including Su-34 fighters and T-72 and T-90 tanks. But still reeling from the lean years of defense spending in the 1990s, Russian industry proved less successful in developing new designs, such as the Su-57 fighters, Lada-class diesel submarines and Admiral Gorshkov-class frigates.

The newest defense plan should fare better. "New capital stock has been installed, higher wages have attracted younger and better-qualified workers, and production lines have been reorganized to enable a shift towards serial production for the first time in the post-Soviet era," the study noted. "This bodes well for GPV 2027 because some of the initial problems Russia encountered in developing and introducing weapons systems under the previous program are likely to be overcome by 2020. As a result, Russia’s defense industry embarks on GPV 2027 from a much better position compared with where it was at the start of GPV 2020."

But what arms will the new defense plan buy? Chatham House suggests there will be priorities. "Systems that enhance force mobility and deployability, especially within Russia’s Airborne Assault Troops (VDV) and Special Operations Forces (SSO), are expected to be emphasized, as are systems that improve logistics and the integration of different branches of the armed forces. GPV 2027 will probably set a priority of strengthening command-and-control (C2) systems for the armed forces - including, notably, intelligence, surveillance and reconnaissance (ISR) capabilities - in order to achieve potential network-centric warfare capabilities."

The ground and airborne troops are likely to grab a larger share of the defense pie, while the navy's budget allocations will decrease.

But particularly noteworthy is that GPV 2027 may stick the final nail into the coffin of the Soviet way of war. "Procurement is likely to reflect what could arguably be described as a shift away from the Soviet-era logic of mass production, towards an emphasis on ‘quality over quantity’ for certain systems (for instance with Iskander missile systems or T-90 tanks). This is a shift that has been taking place in the Russian armed forces since the 2010s. As a result, procurement of higher-quality, upgraded and modernized systems is expected to dominate the new GPV. It is also rumored that there will be an additional emphasis on the standardization and optimization of existing systems."

The Russian military still must overcome several hurdles. Lots of old Soviet systems must be modernized or replaced, which means that Russia's defense-industrial base must struggle to maintain Cold War equipment while developing 21st Century hardware. Russian industry will emphasize meeting military requirements, but won't push the technological envelope. "The effect will generally be a move towards advanced, but not truly modern, standards," Chatham House predicts.

Despite Putin's constant boasts of advanced weapons, such as nuclear super-torpedoes and hypersonic missiles, the GPV 2027 plan will achieve much more modest goals. "While Russia is likely to feel more confident in its ability to defend itself, to assert its interests near its own borders, and to deploy relatively small-scale forces abroad, it will remain a long way from possessing the ability to overwhelm larger, better-equipped peer competitors."