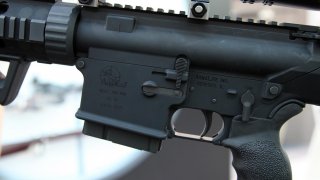 SAINT Victor’s popular firearms selection grows with the latest release of their new AR-10, .308 pistol. Like its brother, the .300 AAC Blackout AR-15 Pistol, this is a variant on Springfield’s SAINT Victor AR-10 Rifle made compact. With the weighty shot of a rifle and a size fits all make, this is a gun that definitely fills a niche and it does it well.

For such a powerful gun with a shorter barrel than most, the SAINT Victor leans on the more accurate side of weapons. Groupings come in spurts of 2 inches at 100 to 200 yards, making it easy to land a bullet where you want it. You might even be surprised with how slim the margins are, given the barrel length. Nonetheless, with this gun it almost is as simple as “just point and shoot.”

While the gun does fine on its own, you’re gonna want a good scope or at least iron sights if you want to reach the peak of your accuracy, especially if you aren’t too well-trained. After all, the .308 round offers one heck of a kick. Sure, it’s no Recce-16, but this is top of the line given the size and the caliber.

The pistol features a 10.3 inch barrel that dips forward with a diverter, which sends the force of the shot all away from you. It’s coated in Melonite to provide protection from wear and tear like rust or corrosion and the bolt is high-pressure tested.

From the many times I’ve shot this gun, I still have little in the way of misfires or malfunctions; reliable is definitely a word for it. Still, I recommend that you take proper care of this gun, despite the precautions built-in for it.

Surprisingly, the AR-10 Pistol weighs more than its older brother, the rifle variant, at 8 pounds, 6 ounces, with the rifle weighing 7.8 pounds. The size of it still makes it easy to port around and able to fit in most places, which makes it especially good for hunting. It’s maneuverable, too; the way it shoots and the polymer grip work together for an excellent feel in your hands.

The gun sports a spacey trigger guard, a bit big for the gun but it gives you room if you like to wear gloves when you’re shooting. The trigger itself is flat-faced and the roominess gives you proper time to get comfortable with it. The pull clocks in at around 5 to 6 pounds. There is no accuracy minus with this trigger; one of the best I’ve used.

The magazine release is easy to engage and reach, which makes reloading a breeze. It has a low capacity, with 10-round magazines but it does have 50 round drum mags available. This is a good option if you’re on the range, but maybe not a crowded range; after all, this is a very loud gun.

This pistol weighs 8 pounds and 6 ounces, which is weighty for a pistol but still relatively light as far as the rifle standard goes. The barrel, as stated before, is 10.3 inches which rounds the whole gun to about 28 inches, which is a tight squeeze for a powerful package. That makes it just about right to strap to your four-wheeler or just to carry around while walking out in your woods.

Surprisingly enough, the recoil is low-cost in this AR-10. While there is a struggle to resist going up with it, it’s more akin to other bog-standard semi-automatic .308s than the kick of a shotgun. There is also a problem with the handguard; while range shooting, you might notice that upon a prolonged firing session, the handguard starts warming up. This is the fault of its aluminium make, but not much to be done about that. This is where that roomy trigger guard comes in handy, so strap on some gloves if you expect to be shooting it for a while!

The recoil is perfect for hunting, especially big game. If you’re hunting small game with a pistol, you might want to turn to the Ruger 57.

MSRP lists the price at $1,399, which is expected given the niche nature of the pistol.

All in all, this is one of the nicest pistols I’ve shot, with a good maneuverability coupled with the power of a rifle. Still, it is a bit niche. It’s good for range shooting if the place isn’t too packed. But self-defense wise, you’d be better off finding a smaller pistol. I would recommend it for people looking to protect themselves in rural areas from wild animals; even if you miss, the gunshot is sure to scare it off.