Why a Small Defense Budget Can’t Stop the Triton 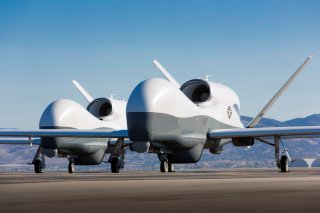 Just when concerned observers, weapons developers, lawmakers and other critics began to lament the “lower-than-expected” numbers emerging from the administration’s budget proposal, and advocates for medium-to-large drones began to fear that upgraded platforms such as the Triton maritime surveillance drone might be reduced or even eliminated, there is reason to rethink those worries.

While there is what the Navy calls a “procurement pause” regarding Navy plans to acquire some new weapons such as the MQ-4C Triton unmanned aircraft, military service leaders appear quite committed to the longevity of the drone, in part through a series of massive upgrades in the areas of Multi-Intelligence gathering capability.

“Investment in MQ-4C’s Multi-Intelligence configuration is critical to the execution of the Navy’s Maritime Intelligence Surveillance Reconnaissance and Targeting Transition Plan that will enable the sundown of the legacy EP-3E,” Navy spokeswoman Courtney Callaghan told the National Interest.

The MQ-4C Triton drone, a Navy-specific intelligence, reconnaissance and surveillance asset now operating in the Pacific theater, has been specifically engineered to operate in a maritime environment, meaning it can change altitude as needed, track moving targets on the ocean, sense through weather obscurants and function with “de-icing” technologies for extreme environmental conditions. It uses an inverse synthetic aperture radar, which is an imaging technology that develops rendering or two-dimensional images of high-value targets by tracking movements at sea.

Despite this tactical advantage, there are only a few Triton’s operating in the Pacific Ocean area, leading some to believe more might be needed to address the threats and vast geographical expanse of the region. However, while procurement of new Tritons may be “paused” at the moment, Navy officials tell the National Interest that it is now immersed in a series of targeting and command and control upgrades to the Triton in order to prepare it for long-term service life.

During testimony before the House Armed Services Committee on the Department of the Navy fiscal year 2022 budget Request on June 15, 2021, Chief of Naval Operations Adm. Michael Gilday explained the service’s emphasis upon intelligence, surveillance, reconnaissance hardening, reliability, targeting, networking and command and control.

“The two biggest challenges that we’re getting after on unmanned are one—reliability. So, the engineering plants have to be reliable so they can operate primarily unattended. The second is command and control and we feel like we’re on a good path on both. But . . . we don’t have any intentions of scaling any of these efforts until we get to a place where we’re comfortable with both of those aspects,” Gilday said.

Stating that “since arriving in Guam in January 2020, MQ-4C has executed over 2,100 ISR hours which has enhanced maritime situational awareness in the theater,” Callaghan seemed to indicate the Navy’s commitment to “targeting” upgrades for the Triton.

Targeting, command and control, long-range sensing, and extensive multi-domain networking are a few reasons why the service may be looking for drones like the Triton to fly in future high-end warfare environments, despite being less stealthy than other smaller drones.