Why Taiwan Needs to Start a Dialogue With China 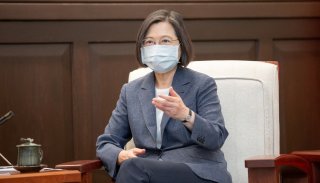 House Speaker Nancy Pelosi’s visit to Taiwan in early August sparked the so-called “Fourth Taiwan Strait Crisis,” which escalated tensions in Taiwan Strait to a high level. Notably, the focal point of the pertinent discussion about this crisis is mostly related to Taiwan’s military reform efforts, the “new normal” in the Taiwan Strait, and the United States and Japan’s role in the event of a Chinese invasion. Admittedly, these topics are undeniably critical regarding Taiwan’s security and deserve tremendous attention. Nonetheless, this trend of discussion is extremely concerning because it reflects the seriousness of this crisis and the potential course of the dispute over Taiwan.

Perhaps the most concerning thing for me and many others in Taiwan is that few discussions focus on how Taipei could alleviate current tensions to avoid further escalation and future conflict through diplomacy. Most confabulation in Taiwan and beyond pivots on how Taiwan can better prepare itself for an upcoming war against China, neglecting Taiwan’s potential to palliate the tension and avoid conflict through engagement with China. To uphold the interest of 24 million Taiwanese, the top priority for Taipei is not to prepare for war but to avoid one. To do that, building a dialogue with China is necessary.

The Benefits of Dialogue

When cross-strait tensions are at a peak, Taiwan must employ effective de-escalation measures to prevent future conflict. To do so, Taiwan should immediately seek to begin a diplomatic and military dialogue with China.

First, the establishment of military and diplomatic dialogue could forestall strategic misjudgment by communicating during times of crisis. An exchange of views between the two sides during critical periods could eventually reduce strategic risk in the Taiwan Strait.  Promoting dialogue could avert a potential conflict brought on by unilateral miscalculations.

Second, dialogue provides an avenue for Beijing and Taipei to exchange views on specific issues, helping the two sides deepen their perceptions on various topics and enhance mutual understanding. For instance, Taiwanese officials could utilize the dialogue to directly send a firm message to Chinese officials about its recent live-fire military drill and the “new normal” that is forming in the strait. This is significant because Taiwanese officials on the front line are truly concerned about its ongoing development. It is necessary for Taiwan to have a direct channel to China to let it know what Taiwan thinks about certain issues instead of delivering these messages through media outlets or official statements.

Moreover, Beijing and Taipei could potentially cooperate on issues that serve their mutual interests. For instance, the serious human-trafficking issue in Cambodia, which is now a prominent problem not only for Taiwan but China as well, could be one area for cooperation. Other topics such as trade, education, and tourism are also potential areas for engagement. In the long run, more cooperation between both sides can increase mutual trust and ameliorate cross-strait tensions.

Finally, dialogue between Beijing and Taipei will put Taiwan in a more proactive position to respond to the developments in U.S.-China relations. In the past six years, there has been no open communication channel between Taiwan and China even though the security environment has been conspicuously degraded. Meanwhile, diplomatic and military disputes between China and the United States over Taiwan have increased. Taipei needs to have a louder say in how both sides approach cross-strait tensions.

Adjustments Must Be Made

Starting a dialogue between Taiwan and China is becoming increasingly difficult for several reasons. The inauguration of the Tsai administration in 2016, which vowed to take a much stronger stance against China than its predecessor, has made several controversial claims about Taiwan’s sovereignty, compromising cross-strait relations.

For example, in a 2021 public address before Taiwan’s national day, Tsai claimed that “the Republic of China and the People's Republic of China should not be subordinate to each other.” This assertion was highly provocative because it invoked the “two country” discourse and challenged its “One China Principle,” further exacerbating cross-strait tensions and deepening mutual distrust. Additionally, while the Tsai administration has refused to engage with China and sought closer ties with the United States, the political disagreements between Beijing and Taipei have only worsened and made the conditions for dialogue more difficult.

China’s increasingly coercive political, economic, and military behavior toward Taiwan in recent years has increased Taiwanese discontent with China. This sentiment toward China obliquely consolidated the Tsai administration’s power and legitimized its approach to cross-strait relations. Today, the Tsai administration has a solid 45 percent support as she entered the second half of her second term and the opposition is not strong enough to pressure the administration to alter its policy. Even if the Tsai administration attempts to build a dialogue with China or show “goodwill”, it might be interpreted by voters as appeasement and hinder Tsai’s domestic support.

Finally, even as the Tsai administration takes a pro-U.S. stance in its foreign policy without engaging China, the deterioration of U.S.-China relations makes promoting cooperation harder. It will be exceedingly hard for the Tsai administration to independently build a dialogue with China if the United States is involved in Taipei’s decision-making process, given that cross-strait engagement might not be perceived in Washington as aligning with U.S. interests.

At a time when the security environment around Taiwan is deteriorating, the Tsai administration must calibrate its China policy and turn to engagement. It is difficult to expect Taiwan and China to start a dialogue in a short period of time given the significant challenges mentioned. Nevertheless, both sides can start by building mutual trust through cooperation on issues with less sensitivity such as countering illicit activities and providing aid after natural disasters. In the end, as “goodwill” mounts, it will allow Beijing and Taipei to promote a dialogue across the strait.

Ray Weichieh Wang is a freelance analyst and contributor for several media outlets in Taiwan and beyond, focusing on diplomacy and politics in the Indo-Pacific. His research interests center on international relations in the Indo-Pacific, particularly focusing on China, Taiwan, South Korea, and Japan. He earned a BS degree in Diplomacy and International Relations from Tamkang University.