Why the U.S. Air Force Sent Stealth F-35s Near the Arctic (Russia?) 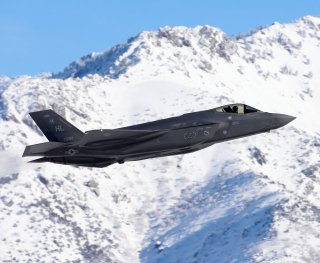 The Air Force has sent a group of F-35 Joint Strike Fighters to an Alaskan Air Base as part of a clear strategic shift toward both the Pacific and the Arctic region. Eielson Air Base is southeast of Fairbanks and a mere 110 miles south of the Arctic Circle. Sending F-35s there was no surprise, and it was done just a few months prior to the Air Force’s publication of a new 2020 Arctic Strategy, according to a write up in The Drive.

The 2020 Arctic Strategy places an additional premium upon readiness for large-scale Arctic warfare in recognition of the fast-increasing strategic and military significance of the region.

The pace of melting ice has expedited an international competition for resources, territory and strategic influence in the fast-changing Arctic area. New waterways are opening up, glaciers are melting, and water levels are warming and rising. As a result, a growing number of nations are angling for favorable positions in the area.

America’s Arctic Strategy, therefore, discusses the need for partnerships, increased training and an overall emphasis upon combat readiness in the region. The F-35, which has already gone through extensive extreme weather training, has the surveillance technology and fleet-wide data links to bring new tactical dimensions to the Arctic. More waterways means an increased Naval presence and members of Congress have raised concerns that Russia has set up several installations and Forward Operating Bases there.

Not only does Russia have more ice breakers than the U.S. Navy, but the country aligns with the Northern Sea Route. That Route is a long waterway bordering the Arctic, which makes access to the area for Russian forces easier.

Forward positioned F-35s could, therefore, operate as deterrents against Russian incursions into the Arctic as well as provide a countervailing Pacific presence in response to Chinese territorial ambitions.

Ice-capable C-130s bring new tactical possibilities as they can deliver supplies, weapons, equipment and technology to fortified military bases in austere locations. Such a dynamic fits within the mission scope of the F-35 as it allows for fifth-generation air support in a critical combat area.

The Arctic not only opens up new possibilities for combat operations but also naturally provides new options and concerns regarding space war and U.S. forces’ proximity to Russian borders.

“This Arctic Strategy recognizes the immense geostrategic consequence of the region and its critical role for protecting the homeland and projecting global power,” Secretary of the Air Force Barbara Barrett said in the service’s Arctic Strategy. “The Arctic is among the most strategically significant regions of the world today—the keystone from which the U.S. Air and Space Forces exercise vigilance.”