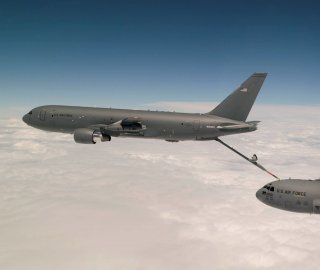 “On July 10, a KC-46 and Airmen from the 931st Air Refueling Squadron and the 22nd Aircraft Maintenance Squadron flew six sorties during a 17-hour mission across four bases to test the aircraft’s ability to carry patients,” Air Force Magazine states.

It is not surprising that the new tanker is being configured as a multi-mission aircraft, given that it has cargo capacity, advanced networking electronics and refueling technology. The now multi-year tanker program has long been a priority for the Air Force.

Using the aircraft for these kinds of casualty-focused missions, perhaps in support of military Critical Care Air Transport missions, bring new tactical dimensions to warfare as it can both evacuate injured service members while also massively extend mission scope.

The new tanker has the ability to refuel via the probe and drogue as well as a boom and receptacle on a single mission, which means it can service both Air Force and Navy aircraft. The tanker can conduct multiple refueling missions concurrently using a drogue, or refueling mechanism on the wings, and a more standard boom and receptacle system.

The new tanker is built with 120 miles of wiring for on-board mission systems. The wiring problems impact about 350 wire bundles of the tanker's roughly 1,700 wire bundles on board the aircraft.

Air Force weapons developers say the 767s have been engineered and manufactured with some military specifications in mind to prevent the need to strip down the aircraft and fully re-configure it for military use, as has often been the case with prior Air Force aircraft acquisition efforts.

The 165-foot KC-46A is being built with Pratt and Whitney engines and the ability to transport up to 212,000 pounds of fuel and 65,000 pounds of cargo. The aircraft will bring an improved ability to conduct aerial refueling missions, Air Force officials said.

The KC-46A is engineered with a centerline drogue system that can transfer 400 gallons per minute and a boom that can move up to 1,200 gallons per minute, he said. It is also configured for aeromedical evacuation and has a reconfigurable cargo deck floor able to carry up to fifty-eight passengers.

The cockpit is built with 24-inch 3D, digital displays equipped with touch screen capability. The aircraft enables crew members a 185-degree field of view and has low-wave infrared cameras.