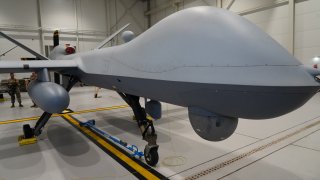 By keeping an eye on enemy movements, beaming back real-time video of combat developments, and sustaining a persistent, electronic “eye” in the sky, wartime drones increasingly offer what many war planners consider a decisive margin of difference and defining element of modern conflict. While this may, to a very large extent, be considered somewhat self-evident, what is significant is the staggering pace at which U.S. Maritime forces are adding unmanned systems to its surface, undersea and aerial fleet.

This is so much the case that a new Marine Corps, Navy and Coast Guard warfare strategy, called “Advantage at Sea .. Prevailing With Integrated All Domain Naval Power,” says “our unmanned campaign plan will synchronize our efforts to field a multi-domain portfolio of shore-launched and sea-launched unmanned platforms with urgency.”

The strategy goes on to specifically cite drones as, among other things, adding the capability to “monitor, record, and report instances of coercive behavior. They will also add the capability for scouting, targeting, communications, and battle damage assessment.”

Part of why drones are receiving so much attention and tactical emphasis is because they no longer merely offer a kind of “point-to-point” connectivity between a forward “node” and command and control system but increasingly network with one another and other larger and small combat platforms in near real-time.

“Our networks, battle management aids, and data infrastructure will connect with other joint networks. Combining many informational inputs into a common, actionable operational picture will enable our forces to act more quickly and effectively than our competitors,” the strategy writes.

For example, the strategy document explains that networked unmanned systems can, among other things, provide warnings of major power rivals’ military preparations and operations while “naval forces—including submarines, surface ships, aircraft, and unmanned systems—gather intelligence from a variety of sources.”

Tactically speaking, it is not an exaggeration to say that unmanned systems are fast re-shaping the character of war, opening up a new era of land, air, surface and undersea data sharing, massively multiplying the points of view and overall intelligence picture for combat commanders. In effect, they reinforce, sustain and increasingly enable an emerging warfare tactical reality that information itself is a weapon of war as sharing targeting data between submarines, surface ships or carrier-launched fighter jets in minutes if not seconds completely transforms the sensor-to-shooter timeline, a factor which could easily be seen as something quite likely to determine the outcome in war.

They also of course add longer endurance as an undersea or surface drone, for instance, would not have to return to port or a host ship as a specific “shift” to return sailors and marines. Some undersea drones, for instance, can maintain an uninterrupted operational presence for up to a month without needing to return to the launching point. This phenomenon is also true, to varying extents, with surface drones as well such as mine-sweepers, attack drones, or even large unmanned command and control ships. The Navy is now in various stages of fast-tracking new large, medium and small surface, undersea and aerial drones to the fleet, some of which are expected to be operational in a matter of just several years, if not months.

Finally, it may seem almost too obvious to mention that perhaps the greatest advantage afforded by drones in combat is … lives. Removing the need for manned boats subject sailors and marines to closer-in enemy fire. Stand-off distances, enabled by command and control networking, allow humans to make decisions about attacks, intelligence or other tactical nuances while much safer from enemy attack.