Why the U.S. Navy Keeps Sailing Through the Taiwan Strait (10 Times This Year) 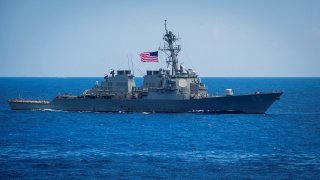 In a press release, the U.S. Navy announced that a hardy Arleigh Burke-class guided-missile destroyer, the USS Mustin transited through the Taiwan Strait, which the Navy called “routine” and “in accordance with international law.”

It’s been a busy year for the U.S. Navy in the Pacific, and in the South China Sea in particular.

Concurrent to the USS Mustin’s transit, the United States is also hosting the Rim of the Pacific maritime exercise (RIMPAC). This year’s biennial exercise, which is the world’s largest international maritime exercise, is somewhat reduced due to the coronavirus pandemic. However, it still includes “ten nations, 22 surface ships, one submarine, multiple aircraft, and approximately 5,300 personnel.” This year’s exercises forwent land maneuvers in favor of sea-only exercises in an effort to reduce the spread of the coronavirus amongst military personnel and the people of Hawaii.

The USS Mustin’s recent voyage marks the tenth time this year that an American warship has transited through the Taiwan Strait, the highest number since 2016 and coincidentally the last time that China participated in the RIMPAC exercises.

In 2019, U.S. ships sailed past Taiwan and China a total of nine times, and in 2018 just three. The United States might even beat the 2016 record of twelve transits before the year is out. In addition, the United States has sent bombers through or near the disputed waters and has also conducted drills in the area with aircraft carriers.

Once a participant of the RIMPAC exercises, China was disinvited from the war games in 2018 due to its militarization of the South China Sea. Beijing’s first RIMPAC games were marked with controversy when it sent a spy ship to the games unannounced in addition to the four other vessels that were official participants.

Meanwhile, the U.S. Navy isn’t the only one conducting exercises in the South China Sea. Earlier this summer, Chinese troops simulated a takeover of the Dongsha Islands, a small group of islands claimed by China but administered by Taiwan. In response to the exercise, 200 of Taiwan’s best Marines landed on the disputed Dongsha Islands to augment the approximately 200-strong contingent of Coast Guardsmen stationed there.

These Marines are said to have “received special training from the U.S. and are capable of carrying out anti-landing and anti-parachute operations against the enemy.” Though a 400-strong force would be unlikely to resist a concerted Chinese attack, the message Taipei sent via their deployment was clear: don’t even think about it.

The South China Sea is increasingly a high-traffic area—for both the United States and China. We’ll no doubt hear more about American warships transiting the Taiwan Strait, and Chinese military exercises in the future. Watch this topic for further developments.