Why the U.S. Navy Loves the Naval Strike Missile 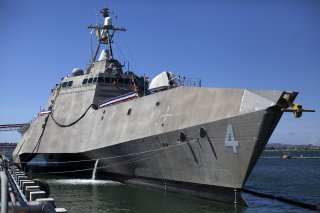 The Navy is taking its Littoral Combat Ship-mounted over-the-horizon Naval Strike Missile (NSM) to new attack levels. Navy officials are achieving this goal by improving its connections with other weapons systems, command and control technologies, and “nodes” operating within a broader maritime warfare network.

“We have proven NSM and are increasing the ability to interface with more missiles than what is on LCS. We are integrating it within the combat system,” Capt. Jason Kipp, program manager, PEO Integrated Warfare Systems, told an audience at the Navy League's Sea Air Space Symposium.

More tests for this expanded technical targeting capacity are expected in the coming months, as it is the kind of adjustment able to greatly improve the target envelope and precision guidance of the weapon. Navy strategy documents show that the concept is to better arm the entire surface fleet with offensive and defensive weapons intended to improve the ship’s attack reach, blue-water combat capability and of course land-attacks resulting from littoral operations.

The NSM, which can fire as far as one hundred nautical miles, is being integrated onto the Navy’s entire fleet of Independence-variant LCS.

“Over the last years, we have accelerated that install,” Kipp said. “We are working with PACFLEET to arm every Independent variant with NSM before she goes (deploys).”

Some of the weapon’s key attributes, such as range and precision guidance, seem to lend themselves to the kind of multi-domain use now being pursued by the Navy. Data collected by Raytheon shows that the NSM is a 156-inch missile that first emerged in 2012. It features a launch phase solid-propellant rocket motor booster and a sustained flight JP-10 fueled turbo-jet engine enabling subsonic speeds.

NSM has a programmable fuze, which includes an ability to penetrate prior to detonation for maximum destructive effect. It is also specifically engineered with a low radar signature and an ability to operate close to the surface in sea-skimming mode to elude enemy radar.

“It climbs and descends with the terrain and performs evasive maneuvers to counter the world’s most capable defense systems. NSM possesses the capability to identify targets down to ship class — a feature that is vitally important to warfighters who must strike only specific, selected targets in congested, contested and denied environments,” according to Naval Recognition.

Kipp also noted that the promise of the NSM weapon is inspiring a current Marine Corps effort to fire off a land-based, transportable island-hopping variant of the missile called the Ground-Based Anti-Ship Missile.

The Marine Corps GBASM will be a disaggregated, multi-domain mix of combat tactics and variables to include advanced maritime, air and land-based operations, including an ability for newer kinds of land-sea “island-hopping” amphibious attack wherein Marines and even heavy weapons transport and transition quickly from sea to shore and back .. quickly. Weapons systems primarily thought of as surface fire are now being configured as mobile, adaptable attack platforms able to transport from ships to land-firing locations and back, depending upon threats and mission requirements.

This kind of tactical dynamic, which would of course apply to littoral land-sea island strips such as those in the South China Sea, is likely emerging due to the decided recognition that adversaries operate with advanced weapons and platforms capable of threatening amphibious forces in previously unprecedented ways.

Additionally, these kinds of threat scenarios are also likely formed the conceptual foundation for the Marine Corps’ emerging Light Amphibious Warship, a now-in-development platform intended to pick up and transport Marines and weapons in an agile, fast, multi-domain and expeditionary way. Members of Congress are showing great interest in the development of this new Marine Corps platform, given the current threat environment and the prospect of adding additional “over the horizon” attack options.

“The Marine Corps has a very good operational concept about how that (The Light Amphibious Warship) would work, especially as they are going to look at putting their units into formations that are dispersed throughout the Indo Pacific armed with long-range strike capability, and anti-ship missiles,” Rep. Rob Wittman (R Va.), the ranking member on the House Armed Services Committee Subcommittee on Seapower and Projection Forces, told me.