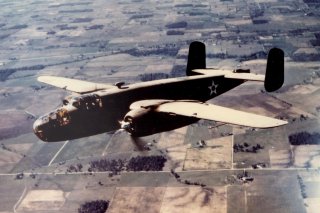 The B-25 was first designed in 1940 and was intended to be the United States’ medium bomber workhorse. On paper, the B-25 was not particularly spectacular: it had two engines, a pencil-like fuselage, and a fairly modest bomb loadout. Still, the B-25 was not without its merits.

A staggering number of B-25s were built during World War II. The design proved flexible, and a large number of aircraft variants were built to suit the needs of the different armed services—and other countries, as the B-25 platform was widely shared with the Allies as a part of the Lend-Lease war material sharing agreement. B-25s were shipped to Britain, the Soviet Union, and after the war to the Canadians, Dutch, and Australians, to name a few.

The B-25 Mitchell design was far from perfect, but highly regarded by flight crews as durable and reliable, forgiving to pilots even with one engine out and full of bullet holes. It was not out of the ordinary for B-25 to have logged enormous amounts of repaired damage throughout their flight lifetimes.

One of the few drawbacks from the crew standpoint was the B-25’s engine noise. The airplane’s engines were relatively close to the fuselage, and in a unique arrangement the plane’s exhaust was directed toward the cockpit. Some B-25 pilots and crew members would experience varying degrees of hearing loss after the war thanks to excessive engine noise.

Though the B-25 was used by the United States in every theater of war, it was most useful in the Pacific Theater. As the war progressed, the B-25 was outfitted with more and more forward-facing heavy machine guns. The bomber’s medium-level bombing proved to be useful for troops and against targets deep in thick jungle, where the B-25’s low-level bombing and strafing runs were particularly potent. The B-25 also experienced success by adapting this low-level strafing tactic in an anti-shipping role.

The B-25 design was evaluated as a potential gunship platform, a role the airframe could have excelled at, had it been adopted. As a gunship, the modified B-25 could bring an awesome amount of firepower to bear on a target. One of the gunship prototypes had four .50 caliber heavy machine guns mounted in the nose, as well as an enormous 75 millimeter cannon. Additionally, the prototype could carry four more .50 machine guns in two flank-mounted pods, two in a manned turret just aft of the cockpit, one on both sides of the waist, and two for the rear gunner, bringing the number of onboard guns to an astounding fourteen.

The B-25 was also involved in an accidental crash with the Empire State Building in New York. Flying through heavy fog, a B-25 crashed into the north side of the building, en route to Newark Airport in New Jersey, killing all passengers on board and eleven people in the building.

Perhaps one of the B-25’s best-known chapters was in the Doolittle Raid of World War II fame. Four months after America’s Day of Infamy attack on Pearl Harbor, Lieutenant Colonel Jimmy Doolittle led a 16-plane raiding party on an attack on mainland Japan. The raid was successful, and though it caused very little in terms of actual material damage, it did much to boost American spirits early in the war. It also was a sharp psychological blow to the Japanese, who had considered mainland Japan to be too far out of reach to be bombed. As a result of the Doolittle Raid, Japan diverted ships and soldiers closer to the mainland to better protect Japan from American air attacks.

Though nothing fancy, the B-25 was a true American workhorse that just kept soldiering (or rather, flying) on. Its solid design helped turn the tide for the United States world-wide, but most especially in the Pacific. Hats off to an American icon.