Will China's Air Force Be Deadlier Than America's in 2030? 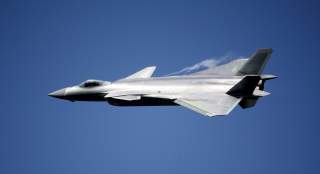 Key point: “[China] will have a lot of technology that’s better than the stuff we’ve had before,” Welsh said. “And the Russians are doing the same thing.”

China’s People’s Liberation Army Air Force (PLAAF) will be able to match or exceed the United States Air Force in the number of fielded combat aircraft by 2030. Moreover, while American forces will still maintain an edge, the technological gap between the two great powers will have closed significantly between now and then.

Right now, the PLAAF is slightly larger in terms of personnel, however the U.S. Air Force has a “couple thousand more aircraft,” Gen. Mark Welsh, Air Force chief-of-staff, told the House Appropriations Committee’s subcommittee on defense on March 2. “At the rate they’re building, the models they’re fielding, by 2030 they will have fielded—they will have made up that 2,000 aircraft gap and they will be at least as big—if not bigger—than our air forces.”

But it’s not just sheer numbers, the PLAAF is rapidly fielding newer and much more capable aircraft. Some of those are completely new warplanes like the stealthy Chengdu J-20 and Shenyang J-31, while at least three more are upgraded versions of existing fighters like the J-11D and J-16 among others. Moreover, China continues to import advanced Russian-made fighters including the fearsome Sukhoi Su-35S Flanker-E.

“We are not keeping up with that kind of technology development,” Welsh said. “We are still in a position of—we will have the best technology in the battlespace especially if we can continue with our current big three modernization programs.”

Those modernization programs are the Boeing KC-46 tanker, Lockheed Martin F-35 Joint Strike Fighter and the Northrop Grumman B-21 Long Range Strike Bomber. However, even then America’s technological edge will not be the vast gulf the nation has grown accustomed to since the end of the Cold War.

“[China] will have a lot of technology that’s better than the stuff we’ve had before,” Welsh said. “And the Russians are doing the same thing.”

Unlike the Chinese, the Russians are much more focused on modernizing their nuclear forces. “They’re demonstrating capabilities that they haven’t demonstrated to us before—cruise missiles, some of their new aircraft are dropping weapons for the first time in conflict,” Welsh said. “We’re able to watch and see how this is working.”

Welsh warned that the Russian and Chinese air forces are dangerous and highly capable potential adversaries that have to be taken seriously. “They’re serious air forces and they’re serious about getting better,” Welsh said. “The Chinese in particular, clearly have a blueprint that is matching against our shortfalls. And I think that’s something we have to consider as we look to the future.”

Dave Majumdar is the former Defense Editor for the National Interest.