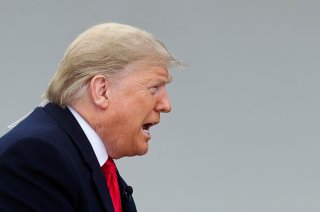 The United States’ economy, the primary engine of the world’s growth and innovation, has been shut down. The coronavirus pandemic, which is infecting Americans at an exponential rate, has led to the mass closure of business and corresponding layoffs and the government attempts to get a grip on containment.

For Donald Trump, this is a crisis never before faced in his presidency. It’s a crisis, in fact, few presidents have faced. But as the country prepares for millions to become unemployed, and for economic activity to decline as much as 50%, perhaps the best question to ask about President Trump’s reelection is: will he be a Herbert Hoover, or a Franklin Roosevelt?

Like Trump, Hoover was a businessman who before 1928 had never been elected to office. His public policy chops, however, were incomparable. Near the end of World War I and immediately after, Hoover was appointed to be the “Food Czar,” overseeing domestic food production and later head of the American Relief Administration, which distributed food to the war-torn areas of Central and Eastern Europe. As a bureaucrat, Hoover ran a tight, efficient ship, and he earned the sobriquet, “the Great Humanitarian.”

He was held in such high regard that he was approached by both Republicans and Democrats to seek their party’s presidential nomination in 1920. Hoover deferred that year, and declaring himself a member of the GOP, accepted the position of Secretary of Commerce under President Warren Harding, and continued to serve through the Calvin Coolidge administration.

Elected with a solid majority to the presidency in 1928, things were riding high for Hoover until the fall of 1929, and the stock market crash that marked the start of the Great Depression.

His counterpart, Franklin Delano Roosevelt, had less a career in administration than one in politics. Like Trump, he was jovial, friendly, and polarizing. Hailing from a family of wealth (as opposed to the self-made Hoover), Roosevelt was elected to the New York state senate in 1910 and never looked back. Appointed as Assistant Secretary of the Navy under President Woodrow Wilson, he took on the same oversized role his already famous fifth-cousin, former President Theodore Roosevelt.

His skills were savvy enough and political connections strong enough that he became the vice-presidential nominee of the Democratic Party in 1920. After the personal accomplishment of mentally overcoming polio (which bound him to a wheelchair the rest of his life), Roosevelt became Governor of New York in 1929 and was reelected by a wider margin two years later.

Herbert Hoover and Franklin Roosevelt had largely the same prescriptions to solve the depression, including bank holidays, drastically increased spending, public works projects. So why did Roosevelt defeat Hoover in 1932 by a large margin, but Roosevelt was able to win in a landslide in 1936 when the economy was no better off?

It’s a difference in personality. Hoover was impersonal, isolating, unable to inspire confidence during a crisis. On the other hand, Roosevelt was quick to smile, supremely confident in his own judgment, and rode the theme of “Happy Days Are Here Again” to the White House.

Maybe policy difference will matter this November, in an election pinning Trump against Democratic challenger Joe Biden. Or maybe it’ll be a question of persona, an image of leadership. And on that count, Donald Trump is much more Franklin Roosevelt than Herbert Hoover.