Will the Marines’ Amphibious Combat Vehicle Ever Make It Into Battle? 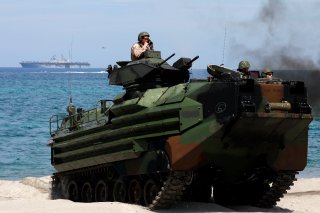 Defense officials explained that the Marine Corps requires additional time for the vehicle’s certification. The additional time will also be used to smooth out kinks in the Amphibious Combat Vehicle’s maintenance and logistics.

During the training accident earlier this summer, a pair of Amphibious Combat Vehicles became disabled while conducting water operations near Camp Pendleton in California. Footage of the incident appeared to show one Amphibious Combat Vehicle overturning in heavy surf, raising questions about the vehicle’s ability to traverse the littoral zone—a serious question for a vehicle designed to take Marines from ship to shore.

Though the Amphibious Combat Vehicle lacks tracks and opts instead for an eight-wheel drive design, advances in wheeled technology give it superior on-road mobility and potentially better off-road mobility than the older Assault Amphibious Vehicle.

Late last year, the Marine Corps explained that it would end all water operations with the Assault Amphibious Vehicle following a deadly accident in 2020 that saw an AAV sink off the California coast, killing one sailor and eight Marines. An investigation by the Marine Corps concluded that a number of failures in leadership and training were responsible for the sinking.

Given the proliferation of increasingly long-range anti-ship weapons, speed in the water is not only of obvious utility—it is absolutely necessary for Marine Corps survival.

Given the recent mishap, the Amphibious Combat Vehicle experienced while in the water near Camp Pendleton, combined with questions about its survivability in a littoral environment, it seems that the Marine Corps may have some additional testing to do with the design before it’s ready for more widespread deployment throughout the Marine Corps.